3 Myths About Exercise During Pregnancy, Debunked

I’ve said it before, and I said it again, but when I learned I was pregnant, I just knew I was going to be able to continue on my workout routine as I’d always done… that is, until I received the word from my doctor.

I mean, it was a sentence, but it was basically molded into one word: “sitchowassdownsomewhere.”

My situation was unique. But for many, they aren’t anywhere near as restricted as I was during pregnancy.

If you want to exercise during your pregnancy, chances are high that you can. Sure, you’ll need to discuss with your doctor any particular challenges you have in bringing a healthy baby to term, but working out with a baby-to-be on board? Absolutely.

That is, if you can separate the fact from the fiction of what pregnant people can and cannot do during those 40-or-so weeks.

I mean, the myths are intense. “Working out deprives your baby of nutrients!” or “Lifting your arms above your head too much will result in the umbilical cord wrapping around the baby’s neck!” or even “That baby’s bouncing up and down against all your organs in there!” and beyond… even down to those who shame pregnant women for doing anything other than sitting on the couch eating ice cream for the better part of a year.

Here are a few of my favorite myths about active pregnancies, and here’s the real deal to help you figure out what’s best for you and your family-to-be:

1) “You’re going to have the baby bouncing around all in there with all that jumping!” — It’s time to bust out my favorite pregnancy diagram. 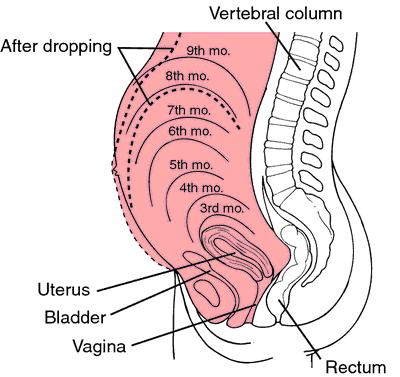 the size of the uterus and how it grows throughout pregnancy

When you become pregnant, your baby-to-be—hereafter referred to as a ‘fetus’ so as to differentiate between when we’re talking about in the womb and out of it—is enveloped nicely within the placenta, then the uterus, then the abdominal walls. As the fetus grows, so does the placenta, the uterus, and the abdominal walls. The female body adapts to the size of the fetus, but only enough to allow for it to grow and expand as necessary. It’s a tight fit. There’s no “bouncing around” or “bumping against internal organs” to be had, here.

I think what’s happening here is that we see photos of 10, 12, and 20 week pregnancies, and we see a small fetus in what looks to be a sea of amniotic fluid, giving us the impression that there’s this thing the size of a coin bouncing off of stuff in a massive sac of liquid. That’s simply not the case. We have to remember that the photo is 1/1,000th of its true size, meaning that the sea is more like a half-drank 6oz glass of water and the fetus is truly the size of a coin. Also? Because the placenta is translucent-looking in photos, we’re looking through it. It’s giving us the impression that there’s more space in there than there truly is.

2) “All that working out is going to make the umbilical cord wrap around the baby’s neck!”—So, wait. Let’s lay some foundational info out here, first.

This is called a “nuchal cord,” and it’s far more common than we think. (Even though I gave birth to Baby Sprout via a c-section, he had the umbilical cord wrapped around his neck before they brought him out, too.) If the cord wraps around the fetus’ neck enough to make a complete loop, then it is referred to as a “nuchal cord,” and it is often resolved on its own because the fetus is constantly moving, twisting, and spinning in the womb during its stay. There’s very little you can do on your own to cause it, and very little you can do on your own to undo it—it’s the responsibility of your OBGYN and/or midwife squad (I had both) to keep tabs on it and ensure safe and healthy delivery.

But what really underlies concerns about this is the thought that a nuchal cord somehow suffocates the fetus or chokes it, preventing it from receiving oxygen. I mean, if I wrapped something around your throat, you’d freak out and suffocate too, right?

The difference between you and a fetus, however, is the means by which you both receive oxygen and the necessary nutrients. You inhale oxygen down a windpipe, through the lungs, which then processes it so the heart can send it throughout your limbs. A fetus, however, doesn’t receive oxygen or nutrients that way, instead using the umbilical cord for these until the actual birth. (That’s part of what makes that first cry so important post-delivery—it’s a healthy sign that the baby is receiving oxygen and the lungs are healthy.)

A healthy umbilical cord is thick enough to resist the kinds of squeezing that we’d envision preventing it from delivering oxygen to the fetus, and in the majority of cases there isn’t enough torque (or spinning force) to create that kind of pressure, either. Remember, it’s a pretty tight fit in there. Further, the umbilical cord is filled with a thick kind of jelly to help protect it from the kind of pressure that would reduce flow. Lastly, even in vaginal delivery, the cord doesn’t necessarily tighten because the thing its attached to, the placenta, moves with it (because, remember, that has to be delivered, too.)

Now, there’s not a ton of research on nuchal cords and complications, but here’s a couple. The important thing here, is to know that your choice in movement or activity is unlikely to cause them and, if your baby-to-be develops one, it’s highly unlikely to be a major problem, seeing as how they don’t “choke your baby out.” Tight fit, remember?

Here’s some more helpful information across the web about nuchal cords. It’s all going to tell you basically the same thing: baby, be cool.

3) “Working out deprives your baby of nutrients and calories to help it grow!”—Nope. Not even a little bit.

When you eat, the nutrients are processed in your stomach then filter to the fetus first, then you get the rest. In a sedentary person, the increase in calories intended to accommodate a healthy pregnancy grows from 0 in the beginning to possibly 400 or so near the end (some will require more, some less.) When you have to account for activity level, those numbers rise—not to make sure the fetus is okay, but to make sure you are okay.

I can understand why some may want to cut calories or work out a ton to ensure they don’t gain a bunch of weight—it’s less about vanity and more about our country not giving child-bearing bodies the time to heal and recover from the intense event that is child birth, so we have to jump right back into our work uniforms and wardrobes and continue life as expected—but resist the urge to cut too many calories. It’s not about harming the fetus, it’s about ensuring that you are able to complete your everyday tasks without feeling foggy-brained, dizzy, exhausted, moody, and overall impatient.

I know—you’re reading that and thinking “Hello, that’s pregnancy.” No, trust me—it’s multiplied in intensity when you’re not eating enough, especially since whatever you do eat will go to the fetus first. Deprivation serves no one… especially not you.

Old Wives’ Tales, once upon a time, kept us safe… that is, before we had modern medicine to help us better understand what limits us and what pushes us forward. Now, we know so much more, that we can definitively say an active pregnancy can be among the healthiest of pregnancies. Even if it’s as little is a daily walk—which is what I had to do!—it can make a difference. So, if you’re up to it, get up! Get out! And get moving! Your body—and your baby-to-be!—will thank you for it!

Q&A Thursday: Do I HAVE to Give Up Carbs?

Can You Lose Weight—and Keep it Off—On a Diet?

The Case of the Mysteriously Disappearing Black Women

Don’t Stress Over the Post-Baby ‘Snap Back’