The Granddaddy Of All Interactive Food Desert Maps

Just as I was finishing up my post on food deserts, this map fell into my lap. 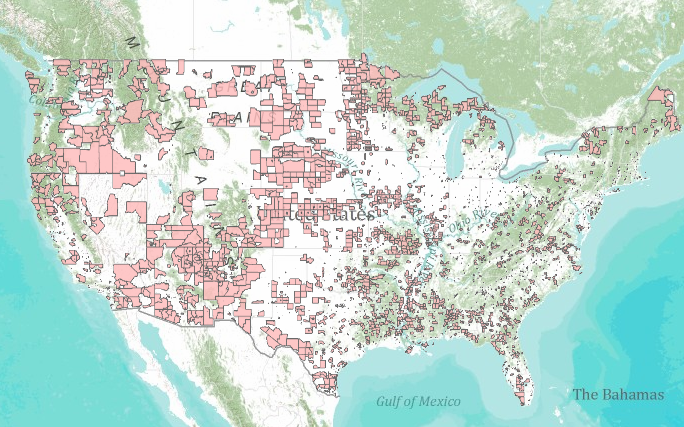 See that? Think it’s cool? If you click this link, you can visit the interactive version, which allows you to explore, in depth, county by county (parish?) every city in the US. While it may have inaccurate spots, it is still a good guide. There have been reports of certain suburban areas being inaccurately painted as food deserts which makes sense – most suburban areas have high car usage, which would likely compel someone to declare “it’s not a fod desert!” Uh, it is – you’re all just privileged enough to not feel the effects of it.

According to government agencies assigned to look at food availability as part of Michelle Obama’s Let’s Move! campaign, a “food desert” is defined as a low-income census tract with limited-access to healthy food. In urban areas, that means it’s more than 1 mile away from a large grocery store or supermarket or 10 miles in the case of rural ones. The map of these census tracts show how common these food deserts are across the United States.

The graphic is an overview from the recently launched Food Desert Locator, which provides detailed information about food access. According to the USDA’s Economic Research Service, 13.5 million people fit the criteria of living in one of these areas. But don’t let the area on the map fool you: the vast majority of these people live in urban areas–82 percent according to the ERS.

So… can we stop playing blindfolded games with this silly “There’s no such thing as a food desert!” back and forth and be about the business of figuring out how to get more grocery stores in areas that need them, since there is obviously a need?

Is This Tennis Player’s Weight Affecting Her Ability To Compete?

A good friend of mine is in a “desert” — although she personally is only a half-mile from a grocery store AND a roadside farmers’ market, most of her census tract is a lot further away. I personally live only a mile from the nearest supermarket, and a weekly farmers’ market (although for whatever reason, probably slightly higher average income level, my census tract isn’t “desert”).

But here’s the thing — even though I can walk that 2-mile round-trip, even carrying groceries, we live in South Carolina. It gets ridiculous here in the summertime, and I wouldn’t walk that 2 miles outside in an August heat wave if you paid me, I don’t care how much I love that farmers’ market! (Spring or fall, you’ll see me out there, but summer and winter it’s car or starve.)

I am so damn tired of “I can’t see it so it isn’t happening!” Is it really that hard to care about other people’s problems?

Here’s my question about this. There are areas on the Upper East Side of Manhattan that would not be considered low income, but don’t have supermarkets for about 20 blocks?

For example, I live in Harlem but there are four supermarkets in walking distance to where I live, however when I house sat on the Upper East Side, 20 years ago I had to walk about 10 blocks to get to a supermarket.

I think that’s what confuses some people. I mean I KNOW there are food deserts, but if you live in a poor area and have a car, are you living in a food desert? I think people live in food deserts when they have no access to healthy food, and that’s no matter where they live.

I think the map (and its “about” page that sets out the criteria they used to label a census tract a food desert) resolves a lot of this confusion . If you click on the pink tracts on the map, a bunch of stats pop up. They include what percentage of the population is both low-income and low-access. It also shows how many households don’t own automobiles. Furthermore, let’s not forget that owning a car doesn’t mean you can afford to keep gas tank full, paperwork up to do date, and all parts functioning at all times.

Contemporary NYC is such a strange place for these national measures. I didn’t see one pink tract in the five boroughs. I’m sure the Upper East Side tract didn’t meet the income requirements. Also, I don’t want to travel 19 Manhattan blocks on foot/train/bus carrying groceries, but that’s technically under the required mile for low-access in urban areas. As far as I recall, 20 uptown-downtown Manhattan blocks=1 mile. Grocery delivery is also widespread across all neighborhoods, although I don’ t know about each store’s delivery charge$. Technically no food deserts, but I remember I felt like I was living in one in the South Bronx with the sad selection in my walking distance grocery.

Hi I’m new to your site, and will definitely be back.

Writing here as someone who lives in a largely Latino neighborhood in Los Angeles, I want to point out one interesting phenomenon that seems overlooked, by both the people who make the food desert maps and the people who might enact change.

This is the phenomenon of the roving produce trucks that are especially common in parts of Los Angeles with large Mexican and central American populations. I don’t mean of course the famous L.A. taco trucks, or their recent gourmet cousins, but actual grocers on wheels, who sell onions, potatoes, tomatoes, bananas, watermelons and so forth.

Though there is an Albertson’s nearby, as well as a Whole Foods and a Trader Joe’s, many of my neighbors do not frequent those bricks-and-mortar places, but instead prefer to buy fresh produce from these somewhat battered panel trucks which roam through our area at least twice daily, every day of the week. With low overheads, their prices are cheaper than those big chain stores. Also, I think the women (and it’s mostly women who make the purchases, in my experiences) enjoy the social connection with the drivers/sellers, who will comply with special requests for larger quantities or unusual items. These trucks (basically the fruit/veg version of ice cream trucks) come almost right to our doors, announcing their presence with a musical horn.

So, first of all, I find no mention of these trucks in any of these maps. And second, I think they would be an excellent solution in many food deserts, where bricks-and-mortar change might be slow to happen in the face of unfriendly zoning laws, etc. Bureaucracies tend to stifle innovative solutions, and sometimes it is easier to go around them. Would something like this work in NYC, or in midwestern suburbs? I don’t know, but think this is an idea worth further consideration.

I don’t know that it’s overlooked, so much as it’s simply uncommon. I think it’s just too new, for now, to be quantified and included safely.

I DO know that a woman in Detroit was written about in [I think] the NYTimes for having a produce truck she drove all across the ‘hood to sell produce. Now, THAT brought tears to my eyes. Innovative, creative, functional. I’d LOVE to see more of those making a difference.

I’m wondering which year’s census data is being used for this map. Of course, the first thing I did is hit up my address, and while my little hood is in the clear, it shows that the neighborhoods within census tracts within 1.5 miles to my east and west are food deserts. The tract to my west is anything but low income, and I live in walking distance of a HUGE farmer’s market. In fact, one could literally spit across the line marking the tract into the market’s parking lot. In that same tract, there’s a huge shopping center (that is actually landmarked on the map) anchored by a Kroger, with an Aldi directly across the street, and a Wal-Mart Supercenter on the adjacent corner–but I noticed that the landmark information on the map is that of an old shopping center that hasn’t existed for many years now.

I realize that just because these are all in close proximity to me doesn’t make it so for people in my neighboring tracts, but I can’t help feeling like the data is a smidge outdated.

There’s still a lot of work that needs to be done with food education and widening people’s palates. I once lived in a nearly overindulgent food oasis. My roomates teased me all the time about visiting all of the little specialty groceries, and the big box grocery store down the way while they ate primarily from the bodgea on the corner. They teased that those places didn’t have “regular food”. Yet, when it was time to really put a meal together for the household, they depended on me to do the grocery shopping.

At any rate, I’m glad to have this resource; it’s interesting to look at all the places I’ve lived and see how I’ve always been in the clear, even though I’ve been the type to travel far and wide to get a better selection and quality of food.