Home BeautyBody Image The Ridiculousness of Women’s Clothing Sizes, All in One Chart

The Ridiculousness of Women’s Clothing Sizes, All in One Chart

Here’s some quick and dirty info from the Washington Post Wonkblog:

Here are some numbers that illustrate the insanity of women’s clothing sizes: A size 8 dress today is nearly the equivalent of a size 16 dress in 1958. And a size 8 dress of 1958 doesn’t even have a modern-day equivalent — the waist and bust measurements of a Mad Men-era 8 come in smaller than today’s size 00.

Centers for Disease Control and Prevention data show that the average American woman today weighs about as much as the average 1960s man. And while the weight story is pretty straightforward — Americans got heavier — the story behind the dress sizes is a little more complicated, as any woman who’s ever shopped for clothes could probably tell you.

The graphic in question: 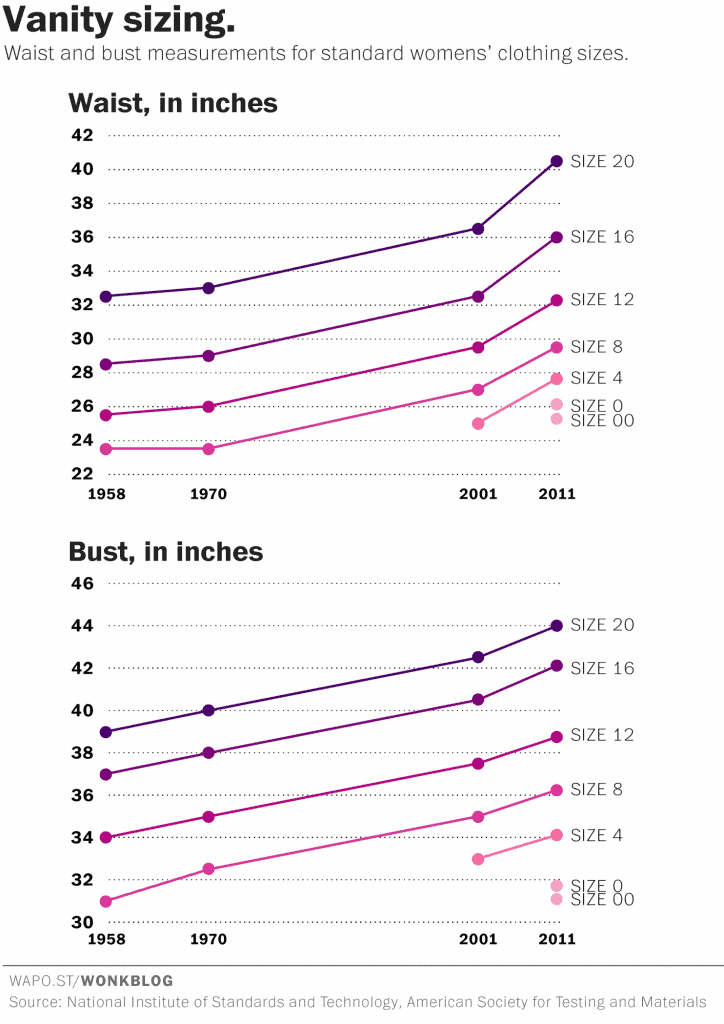 The article references a Slate essay that explains the origins of clothing sizes… and their subsequent ridiculousness:

The federal government did take a stab at it in the early 1940s. —

That was when the Depression-era Works Progress Administration commissioned a study of the American female body, an effort to instill a method to the sizing madness. At that point, the ready-made clothing industry was in its infancy. If your clothes are made-to-measure—as they were in an earlier era, particularly for wealthy women—there’s no need for a standard set of sizes. But as European couturiers were hobbled by World War II, an American fashion industry developed, with New York as its capital city. New York’s all-star cast of designers, among them Claire McCardell and “Sophie of Saks,” specialized not in couture but in ready-to-wear. And as wealthy women began to purchase premade clothing, pressure mounted to ensure that it fit in a consistent way.

The ready-to-wear sizing system that existed prior to the ‘40s was first developed for menswear. Scholars have found evidence of standardized men’s sizing as far back as the Revolutionary War. By the War of 1812, the Army was in the practice of holding stocks of ready-made uniforms sized according to a single measurement, of the chest—based on the assumption that you could deduce from it a proportional understanding of the rest of a man’s body. So, when manufacturers in the early 20th century began to produce women’s clothing, they based women’s sizes exclusively on a single measurement: the bust. [source]

The entire article is really worth checking out. If you’re shifting in sizes, one of the things you might realize is that you’ll wear one size in one brand, and another size entirely in a different brand. If there’s anything worth learning from all this vanity sizing insight, it’s this: don’t shop by the size – shop by how it looks, and how it makes you feel when you wear it. (Besides – if you choose your clothing by what looks good on you instead of what size you hope to be, chances are high it’ll look far better, anyway!)

What Do You Need to #MakeYourMove Towards Being a Newbie Cyclist?

Supermarkets, The Projects, and What We ‘Deserve’