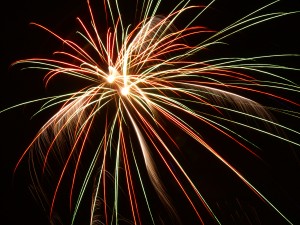 No matter where you turn, you’ll find someone who is making that same tried and true resolution.

And it usually lasts, what? Two months tops? Three if they’re lucky?

The reality is this – some people like start dates. Nothing is wrong with using the start of a new year to signify the start of a major change in one’s life. However, we can’t treat those changes the same way we treat the holiday – once the novelty of the day wears off, so does the resolutions. We can’t do that to ourselves.

What we also cannot do is spend a short amount of time going hard in the gym, or wildin’ out on a crazy diet hoping to get rid of that last little bit of weight. We can’t adopt something only to quit in a few months because we’ve burned out, or because we made changes that were too drastic and were unbearable.

You have to realize that there’s something in your lifestyle that allows that weight to stay on. The issue isn’t the fact that you need to burn off this little bit of weight super fast – the issue is that you need to take a long, hard look at your lifestyle and start making changes that will lead you in the direction of not only achieving your goals, but maintaining them. Make sense?

So instead of making a resolution that involves a gym membership that you’ll only use for ten weeks, what kind of resolutions are much healthier?

Ones that can last. Baby steps. Resolve to hit the gym at least three times a week, if you’re opting to make use of a membership. If not, resolve to go walking for a half an hour a day. Resolve to avoid junk food one day a week. Gradually move up to 2 days, then 3, then allow yourself only a couple of days a week when you eat fast food or junk food. I promise you – you’ll feel so good after accomplishing those simple tasks that they will not only become a part of your regular routine, but natural progression on it’s own will lead you to increasing your own intensity.

Resolve to think before you put food in your mouth. Resolve to drink an extra glass or two of water each day. Resolve to eat breakfast every morning. Promise to get a healthy night’s rest. Try to take the kids to the park at least once a week, and while they’re playing? Walk laps around the playground (this one is mine!) Don’t just burn yourself out in the gym. Don’t just jump on the grapefruit diet. Definitely don’t expect a quick fix to change what a lifetime created.

Clean Eating Boot Camp: What Does It Mean To “Fall Off?” Step 14

This blog entry is on point. For 2 weeks, I’ve been worried about how I’m going to accomplish my fitness goals because over 100 lbs to lose.

I’m going to make a list for myself and gradually increase my goals.

I just want to let you know that you’ve been a blessing to me. I can’t wait to share my successes with you as this new year approaches.

This is so true for me, I only have 13lbs to lose but I am thinking of what I can do to become healthier, I have decided on running. Instead of starting slow and taking the time to increase my miles slowly…I started out running everyday…doing way too much and hurt myself…slow and steady wins the race (or at least crosses the finish line).

I am the “start date” queen!
New Years day, then Valentines day, then the 1st day of Spring, on and on and on.
This post has helped me realize that all I’ve achieved from this is many bouts of yo-yo dieting. I have got to change that way of thinking and agree with you that baby steps is what I’m going to have to take.
Your “no junk food” progression and getting some form of exercise 3 times a week sounds like something that I can do relatively easy.
My problem is wanting to see dramatic results overnight – and we both know that’s not going ti happen!

My New Year’s Resolution for 2011? Floss my teeth every night. Seven months later and still going strong. 🙂 I know it sounds really silly, but that actually was a big step for me, and is related to weight loss (and just taking proper care of and loving me!), because it is those tiny little changes to your everyday life that I have always had the most trouble doing, whether it’s studying a little bit a day instead of cramming the night before a test, or adding 30 minutes of exercise a day instead of doing a huge work out everyday for a week and then forgetting completely. Later in the year when I had to start talking to a shrink about certain aspects of my life that had spiraled out of control I could point to a small change in my behavior that I had actually stuck to and saw positive consequences of (getting your teeth cleaned isn’t uncomfortable when you’ve been flossing regularly – who’d have thought it? :D), and as insignificant as it sounds that was helpful.

Another great article, Erika! For a long time I was the queen of resolutions. But after so many unsuccessful “starts” I finally realized that this type of thinking was not helping me . . . because to imply that there was a “start” to this whole being healthy thing implied that there was also a “stop” to it. (And during those stop times, I would usually binge out of control . . . because, hey, I was going to “start” again soon, right? So why not . . . .) Now I’m focusing on starting where I am at the moment . . . building on what I have learned through past attempts at weight loss and habits that I’m slowly developing and making a regular part of my life.

Great article! I also love what I what you posted from your Instagram today, “Some quit due to slow progress. Never grasping that slow progress…is progress.”
So far, I’ve lost 23lbs since August (I plateaued because of inconsistency-carbs) and even though I wanted to have lost 40lb by now, I have to acknowledge the effort it took to lose 23lbs. I encourage everyone to start their health journey today; you don’t have to wait until the new year. I was in so much pain from edema in my legs that I had to start exercising and eating healthy four months ago. Imagine if I had waited!

*I also love what you posted*