This came across my desk the other day, and I thought it worth sharing:

Academy Award winner Jennifer Hudson headlined a campaign fundraiser for Mayor Rahm Emanuel, and today he returned the favor by joining the Chicago singer in opening a South Side Weight Watchers center that bears her name. 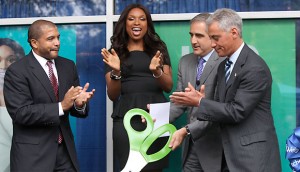 Emanuel appeared onstage with Hudson and used an oversize pair of scissors to help her cut the ribbon at the Kenwood neighborhood storefront location a few blocks from President Barack Obama’s home.

The mayor said Hudson’s work as a spokeswoman for the weight loss company promotes a healthy lifestyle and dovetails with his initiative to institute a “wellness program” for city workers that rewards employees with lower health care costs for participating. Emanuel also drew a connection between Hudson’s weight loss work and his attempts to end “food deserts” in Chicago by bringing in more fresh food options.

“While this center is focused on weight loss, it’s also about healthy living, not just about weight loss,” Emanuel said.

Hudson appeared at a sold-out fundraiser for Emanuel Jan. 11 at House of Blues. Tickets to the fundraiser cost from $30 to $500, according to the Emanuel campaign.

Chicago readers, how is this being received out there? What effect will it have, if any?

What are y’all thinking out there?

Weekend WTF: 17yo Girl Who Lived On McDonalds Since Age 2 Collapses

I’m from Chicago but I heard about this through your blog. I noticed a huge increase in membership at a local Weight Watchers in my area (I no longer belong because I wasn’t following the program).

I think it is a good move. I only wish that it would have been built in a other parts of Chicago where food options and excercise options are less and the need for centers like this are higher.

Jennifer is making a lot of money for Weight Watchers. The only comments that I have heard are that people are kind of tired of the way they do the commercials. (Kinda irritating for some unknown reason) I do however love to see her and how great she looks.

That’s great she opened up a Weight Watchers in Hyde Park! Everyone should be concerned about their health! She grew up in Englewood and it would be nice to see something in that area of Chicago that is affordable for others that need the service also!