Home From Erika's Kitchen How To Make A Quick Chicken, Vegetable or Bone Broth

How To Make A Quick Chicken, Vegetable or Bone Broth

I’ve written before about how to make whole wheat pasta more flavorful, and my main suggestion was to cook it in a broth. The downfall with using broths is that since most people will be using store-bought broths… you run the risk of having to deal with the broths that are high in salt.

And yeah, you could buy a “low-sodium broth” but.. either the flavor is really bland, the flavor is chemically created orrrr you’re paying an arm and a leg for it. Why not just use some of the veggies you have lying around the fridge for your broth? 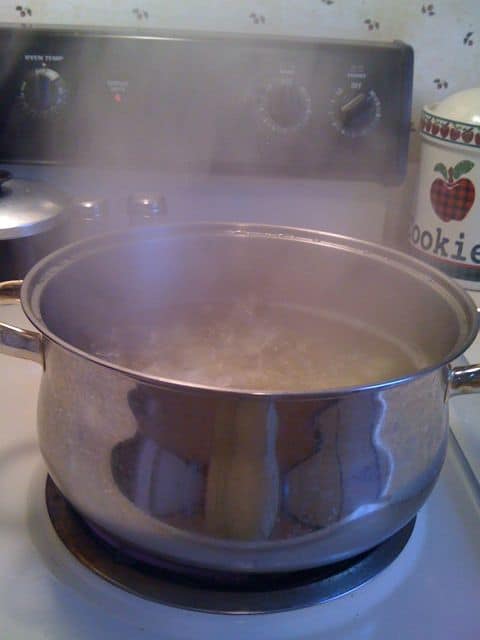 Really, it’s quite easy. I promise it won’t hurt. Just make sure you have a large container nearby to use once your broth has cooled, and perhaps a funnel to help you get it in there.

I’ll be talking about chicken broth, but a veggie broth would simply skip the chicken steps. You may not have the ingredients but once you see just how simple this is to make, you are more than welcome to start plotting to make your own.

(This recipe makes 1 gallon of broth.)

Rinse your chicken. In your large pot, add your olive oil and onions. Saute your onions until they turn a light golden color (this is called caramelizing.) Add your salt and carrots, then keep sautéeing. Add your celery, garlic and ginger. Let it cook for a little longer, then add your black pepper.(Basically, this is a seasoned mirepoix in your pot.)

Set your chicken into the pot with the veggies, then add your water until the chicken is completely covered in it. Add your turmeric, then let it simmer for an hour. Add your herbs (rosemary, parsley, sage, oregano) and continue to cook until your chicken begins to come apart from the bone. This is it!

From here, it’s all about being resourceful. Hold onto the veggies – they may be tender enough to make a pesto. Separate the chicken from the broth, and set it on a plate. Then scoop out all the veggies and place them into another bowl. Take your broth, place it in a container where it can cool for a while. From here, you can let your broth chill, section it up and put it in the freezer. You can put it in jars and store it in the back of the fridge.

You’ve got leftover chicken (unless you made veggie broth.) Start pulling it apart, and place it in a container – you’ve got meat for a meal. Got veggies? Toss ’em in a blender. You’ve got veggie dip… or veggie spread. Chop the veggies up really finely, add a little yogurt to it, and pow – veggie salad dressing… with real veggies in it.

I can even take it a step further – we can use the bones to make another kind of broth.

What is bone stock? Bone stock (similar to broth) is something that’s been made for centuries as a way to nourish a worn body. It’s literally a way to soak the nutrients (and flavors) from the bone right into your liquid. Sounds creepy, I’m sure.. but it’s a great way to eek out those last bits of flavor to get something extra! And, I won’t lie, it tastes great!

Place your bones back into your post (after emptied) and add maybe a tablespoon of vinegar. Let it boil, then skim any unwanted fat from the top of the pot. If you still have your veggies from your broth, go ahead and dump them back in (though this isn’t for anything other than taste, really.) Turn the temp down (or off, really) and let this sit for anywhere from 4-24 hours. You want this to have the opportunity to drain as much minerals and flavor as possible from your bones. After you’re done waiting, just put it away the same as the broth from earlier… and you’re done!

Now, if there’s something else that can be squeeeeeeeeeeezed out from these ingredients, you let me know. But that’s about as resourceful as it gets to me!

Get Life: Can a Lack of Sleep Make You Fat?

You have a wonderful site and I am so inspired by all of your links and recipes! I just made a pot of turkey stock last night and when it cooled, filled 1 liter bags and popped them in the freezer. Wish I had found you 15 hours earlier before that carcass and those veggies went into the compost bin…lol!

I used fresh ingredients, except for the turmeric, rosemary, sage, and oregano – with these, I only had the dried spices. I used the 2 tsp of turmeric, as the recipe says, but used only 1/3 of the rosemary, sage, and oregano, as I was using the dried herbs, not fresh ones, and assumed you made this using fresh. Was I correct in assuming that, and did you use fresh turmeric, too (which I’m not even sure what that looks like)?

I’m curious because I did not like the broth, and I’m trying to figure out if I did it wrong. I currently have a wonderful chicken broth recipe, but the chicken gets cooked down for 7 hours, and is not very useful to eat anymore. While I LOVE that broth, I am looking for a recipe with less waste.

Fresh herbs are always preferable, but guess what?

**leans in close and whispers**

I stick closely to my dried herbs, and you can pretty much bank on me ALWAYS referring to dried herbs, here. Fresh ones, though awesome, are too expensive and I don’t think that cost is worth much for regular daily cooking. If you want to get fancy for a special occasion, then go fresh. Otherwise? Dried all the way.

That being said… you have to use all of everything listed, mama! What did it taste like with the alterations? Too bland? Too salty? Too blah?

With your recipe w/less waste… you could always turn the leftover chicken into a pulled chicken recipe (similar to pulled pork, and stewed in BBQ sauce) and then flip the bones into a bone broth. With the veggies, turn around and turn it into a vegetable stew. All kinds of options here, mama. Get creative!

How long will this last in the fridge?

I can’t say, but I CAN say it’d be better to separate it into cups and freeze it. That’d last forEVER. LOL

My spouse’s grandmother makes turkey soup from scratch using the turkey carcass (which would otherwise be just wasted) after every Thanksgiving. This would be a completely awesome thing, except:

(1) she picks ALL the meat off the bones (which would be awesome EXCEPT she throws the meat scraps away);
(2) she uses zero salt or herbs or spices, just a skeleton and vegetables in water;
(3) she doesn’t take the bones and ligaments and bits out before adding the vegetables, and you can’t tell apart mysterious tendons and potato chunks after hours of cooking.

I like your version better and, knowing that it’s possible to make something un-horrible from a turkey carcass, maybe we’ll take over the soup duties this year…

This sounds Amazing! Do you have you have a Stewed tomato recipe as well?

Do you put the chicken in with the skin on? My grandmother..takes all the skin that I clan off of our chicken for dinner and boils it O_0 it freaks me out, because it seems so unhealthy to boil a whole bunch of chicken fat….Your blog is teaching me so much..I cant wait to purchase your menus!

Your grandmother was smart: the skin isn’t pure fat – it’s skin but fat clings to it – so it doesn’t melt, but it does impart flavor to the stock or soup or whatever you’re making with it. It’d be unnecessarily wasteful to get rid of it when it could still be used in other ways, you know? Chicken has fat, but not enough to elicit THAT kind of response out of you, lolol.

Besides, there are two things to remember here: 1)your body actually needs fat, don’t let anyone tell you otherwise and 2) if it WAS that much fat to work with, you could always skim the fat off and make more of a consomme-type broth, instead. You keep the flavor, skip [some of] the fat. Boom. LOL

Quick question, when making the bone broth, all that is put back into the pot is the carcass and tbsp vinegar? Or am I reading that wrong?