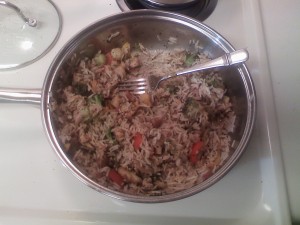 I was never a big rice eater, but in paring down what I keep in the house, I did decide to venture out into trying different kinds of rice. I do have a recipe for “barbecue rice” that I’ll be posting later this week… but in my quest to post a recipe a day from now on, I’ll start with the Basmati Stir Fry.

In one pot, get the rice going as according to the package. In a skillet, pour 1tbsp of your sesame oil in, let it heat up a bit, then start tossing in your veggies one by one. Hopefully by the time all of your veggies are in the skillet and heated up (you don’t want the veggies to lose their color or crunch, but you want them to be heated well), your rice is done. Once it’s finished, go ahead and toss it in the skillet. Shake your seasonings over the skillet, and pour in the last of your sesame oil. Stir it very well a few times, and you’re good!

I’m not even going to tell you how few calories this skillet is. Just know that it’s a great dinner for those who are learning to indulge less. Because not only do I promise you won’t be able to eat as much as you usually do, but it’s maybe a third of the amount of calories that you’re used to eating. 🙂

Hi Erika,
I made a variation of your recipe tonight for dinner and my family loved it! Next time though I’ll add more veggies (I only had onions, broccoli, and mushrooms). I also added an egg to make it more like a veggie fried rice. My daughter and husband (neither one likes any veggies except corn) ate it so fast, I had to stop cleaning the kitchen to get some for myself! LOL

See? I love to hear this! It’s all in how you cook it! Total win!

O.M.G.!!!!! i made this just now (forgot to get sprouts & bell pepper at the store) and it is A-MAZE-ING! no need to add soy sauce or anything. this recipe also forced me to FINALLY try brussel sprouts- LOVE them 🙂 i love your site, thank you so much for sharing so much of yourself with the world. can’t wait to try more of your recipes!

While I did a few things different, this was great! I used some left cold basmati brown rice I had from the other day, and added scallions and egg whites to the recipe to give it (like a previous poster said) a veggie fried rice feel. Will definitely be making it again 🙂

Aww….this recipe is from when I first started cooking. I think I made this, easily, 5 days a week. LOL

I definitely think making it more like a fried rice is a good idea (more protein!), but I definitely didn’t know the difference between stir-fry and fried rice back then! LOL