Why Your Burger Never Looks Like The One On TV 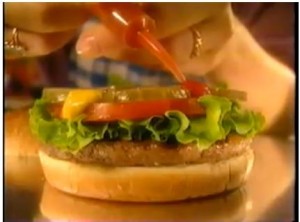 While I haven’t had a burger in about a decade, I’d be lying if I didn’t admit that the occasional juicy thick meaty monster something-or-other on the TV screen didn’t make me a little tempted.

I don’t feel so bad now, especially since it’s – apparently – raw burger and built with toothpicks and sad pickles.

I mean, of course we’ve all wondered why the crap we get in the drive-thru never looks as appetizing as it did in the commercial that compelled us to make the purchase… but really – did we ever think it was this orchestrated?

And as for a “favorite quote” from this clip?

“We don’t want the bun to get soggy, so we take a piece of cardboard and put it between the bun and the burger to soak up all the grease.”

Not good enough for the bun it sits on, but it’s ok for your insides? Err…. thanks, but no thanks. I almost feel like the cardboard, toothpicks and ketchup might be the better bet.

This is FUNNY! Because if it looked like the crap they serve at the drive-thru, we’d never entertain it. WOW!!!!

The REAL hilarious thing about this is… she explains ALL the unappetizing things about burgers – sloppy, greasy, “too small,” etc but we still eat ’em! Seriously?

Is it me, or does the makeup artist look like she has had one too many botox injections?

(I did get a bit of that Stepford wife thing from her… although I believe that was intentional. I hope. LOL)

yeah, it had to be intentional with that LEAVE IT TO BEAVER music!

I’m not exactly sure why anyone would think that their burger would look anything like what they see on TV. Seriously people, wake up and look at the world around you. Pardon my rant…just had to let that out.

It’s marketing – if it gets the person out of their seat, then it has done its job.

I don’t think people ever intentionally believe that their burger will look like the one in the commercial, but to look at someone explaining WHY the burger in its own for is so unappealing and then describe the measures to which they go to make it MORE attractive? I’m sorry, but that’s just hilarious to me. LOLOL

If you find humor in food marketing..check out Tabletop by Rob Akerman.

A pretty crazy play about the making of a food commercial.

Well to be honest, I think that most of us are smart enough to know that the food that advertise is NOT the food they’re selling. I just didn’t realize just HOW propped up it really is. I mean before I saw this, I would’ve just assumed that the burger in they ad was cooked up by a chef – NOT SOME RAW SLAB OF BEEF TACKED ON TO A BUN WITH TOOTHPICKS! 🙁

Sorry. Misspelled that bit. I meant “the ad” instead of “they ad”.

During high school, I was a photographer’s assistant and she did a lot of food-related photo shoots. That totally opened my eyes to the tips and tricks used to make food appear so appetizing on camera and in magazines. When I saw them put shellac on a pizza, I liked to died! LOL!

OMG this is hilarious!! I’m at work and bursted out laughing!! Priceless

The things food companies have to do to trick the human mind is just amazing. My favourite part was that they had to glue each sesame seed onto the most perfect bun…to make the most fake burger. I liked this vid. Thanks for sharing! Don’t you just wanna go grab a burger now? LOL!

… & notice people in commercials always SMILE at their burger before they bite into it?
Do you do that?!?!?!

my son smiles at his burgers, and praises them mightily. however, he is 11yo.

LOL So true! They are never as tasty as you think they will be. Except for Sonic. Their burgers are pretty darn good. Still don’t look like the commercials.

Makes me feel even more motivated about getting healthy, eating clean and loving myself. No one will do that better than someone who has a life to gain and not fiscal profits. Thank heavens for your website – it helps keep me going and i never thought that was possible. THANK YOU FROM UK :)))

Another food trick is to use lard for the ice cream shoots that are taking too long. My personal favorite is only cooking the outside of the turkey so when it is sliced it looks “done and juicy”.