I’m sure you’ve seen this.

On Monday, the New York Times published a story about the breakfast favorite, and the most disconcerting part was this:

Almost 40 percent of the millennials surveyed by Mintel for its 2015 report said cereal was an inconvenient breakfast choice because they had to clean up after eating it.

The industry, the piece explained, is struggling — sales have tumbled by almost 30 percent over the past 15 years, and the future remains uncertain. And the reasons are largely those one would expect: Many people are eating breakfast away from the home, choosing breakfast sandwiches and yogurt instead of more traditional morning staples. Many others, meanwhile, too busy to pay attention to their stomachs, are eating breakfast not at all.

But there is another thing happening, which should scare cereal makers — and, really, anyone who has a stake in this country’s future — more: A large contingent of millennials are uninterested in breakfast cereal because eating it means using a bowl, and bowls don’t clean themselves (or get tossed in the garbage). Bowls, kids these days groan, have to be cleaned. [source]

I’m technically—technically—a millennial, but at least I’m a Reagan baby. Gen X will have nothing to do with me, I’ve accepted that, but I’m okay with my millennial status.

What I’m not okay with is the way millennials are painted in the media. We’re lazy. We need our parents to do everything for us. We’re obnoxious. We’re spoiled. We’re everything that’s wrong with society, and magically our parents, the Boomers, aren’t culpable for this in any way. Okay, fine, I can deal with that. 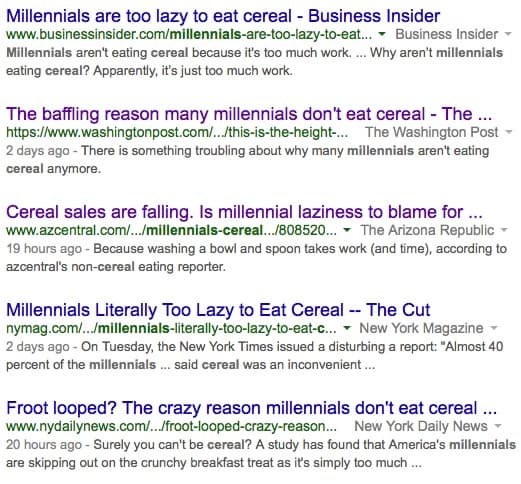 This is where I draw the damn line.

The industry, the piece explained, is struggling — sales have tumbled by almost 30 percent over the past 15 years, and the future remains uncertain. And the reasons are largely those one would expect […] But there is another thing happening, which should scare cereal makers — and, really, anyone who has a stake in this country’s future — more: A large contingent of millennials are uninterested in breakfast cereal because eating it means using a bowl, and bowls don’t clean themselves (or get tossed in the garbage).

Look at that quote. Look at it.

The tone, the timbre—it’s a polite form of Those wretched brats are tanking your beloved cereals!!!!!

Please, give me a break.

Not only is this disingenuous, it’s aggravatingly false, and anyone who bothered to do a sneeze worth of research about what the companies or the experts themselves have to say about why they’re losing sales, you could find it. 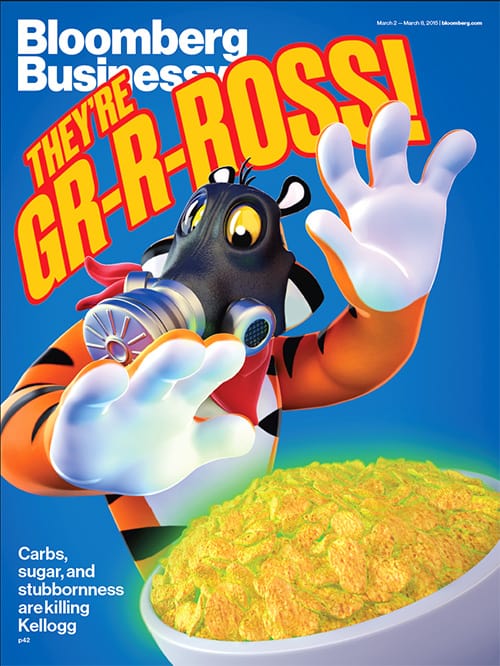 Exhibit A: In an article literally titled, “Who Killed Tony the Tiger?” that I read almost exactly a year ago to this day, you’ll find the following sentences:

[…] at a time when Americans have moved on to granola bars, rediscovered the virtues of hot meals such as oatmeal and eggs, and fallen under the spell of Greek yogurt. […]

On Feb. 12, [CEO of Kellogg John] Bryant , fortified by his customary helping of All-Bran, arrived at Kellogg headquarters in Battle Creek, Mich., to deliver bad news. He announced the company’s U.S. morning-foods net sales fell 8 percent in the fourth quarter of 2014. It was the division’s seventh quarterly decline in a row. “It’s very frustrating,” Bryant said in a postmortem telephone interview.

The 49-year-old Bryant, who resembles a cereal box character himself with his wide eyes, toothy smile, and elongated chin, blames Kellogg’s financial woes on the changing tastes of fickle breakfast eaters. The company flourished in the Baby Boom era, when fathers went off to work and mothers stayed behind to tend to three or four children. For these women, cereal must have been heaven-sent. They could pour everybody a bowl of Corn Flakes, leave a milk carton out, and be done with breakfast, except for the dishes.

Now Americans have fewer children. Both parents often work and no longer have time to linger over a serving of Apple Jacks and the local newspaper. Many people grab something on the way to work and devour it in their cars or at their desks while checking e-mail. “For a while, breakfast cereal was convenience food,” says Abigail Carroll, author of Three Squares: The Invention of the American Meal. “But convenience is relative. It’s more convenient to grab a breakfast bar, yogurt, a piece of fruit, or a breakfast sandwich at some fast-food place than to eat a bowl of breakfast cereal.”

And Kellogg faces a more ominous trend at the table. As Americans become more health-conscious, they’re shying away from the kind of processed food baked in Kellogg’s four U.S. cereal factories. They tend to be averse to carbohydrates, which is a problem for a company selling cereal derived from corn, oats, and rice. “They basically have a carb-heavy portfolio,” says Robert Dickerson, senior packaged-food analyst at Consumer Edge. If such discerning shoppers still eat cereal, they prefer the gluten-free kind, sales of which are up 22 percent, according to Nielsen. There’s also growing suspicion of packaged-food companies that fill their products with genetically modified organisms (GMOs). For these breakfast eaters, Tony the Tiger and Toucan Sam may seem less like friendly childhood avatars and more like malevolent sugar traffickers.

The entire article goes on to quote countless food industry experts who repeat, over and over, that the answer to the industry’s problems is changing the contents of their ingredients, even listing General Mills’ changing Cheerios’ ingredients to no longer include GMO ingredients as an example of a company benefiting from shifting towards what consumers want.

Look at that cover. Look at it. “Carbs, sugar, and stubbornness are killing Kellogg.”

What the hell does that have to do with millennials?

Suppose I bought this nonsense about millennials destroying cherished brands. The original offending article even notes that families are now working more than ever before, and millennials are even delaying child bearing, ostensibly because the constant creep of commitment to their jobs limits their ability to engage with anyone else, let alone a child. (It shouldn’t be lost on us that dating has become less of a thing you do with someone you met out while enjoying yourself, and more of a thing you do with someone you both managed to swipe right.)

If jobs are super-demanding, to the point where people don’t want to be bothered with something as easy and simple as cereal, why is it wrong to not want to spend your free time doing dishes? Why is it wrong to not want the dishes to pile up? When I come home exhausted, guess what? I don’t want to spend my free time doing dishes, either, especially for something as unsatisfying as a bowl of cereal.

That’s not a “millennial” problem. That’s a “Gee, our society has shifted in such a way that people don’t even have the energy to be bothered with dishes” kind of thing.

In the zeal to lay the eventual destruction of Big Cereal at the hands of millennials, let’s remind ourselves to place the blame where it truly belongs: companies who are too arrogant to do their jobs, companies who forget their one true responsibility: listening to the needs of their consumers, and doing their job to fulfill those needs affordably.

Oh, and PS: Parents who don’t require their children do chores likely realize that their children spend so many hours on homework as is, that getting their children to do them would mean cutting into the children’s bed time.

Everything You Need to Know For Your First SoulCycle Ride

I’ve moved away from cereal completely and don’t allow it in the house because its just a bowl of sugar and i’m lactose intolerant anyway, what’s the point in having cereal I’d never eat? [Though I love coconut milk I rarely drink it that often and get nutrients else where.]
For many younger people I think health is growing to the top of the list of reasons for not eating cereal. I prefer rice with steamed veggies and a small serving of fish- it just keeps me fuller for longer and keeps me energized for hte entire morning and well in t othe afternoon. it makes more sense.

Sorry, cereal was never really my thing as it was. Too sweet and artificial tasting. I don’t have it in my house, EVER, and my children (both 5 and 2 respectfully) enjoy greek yogurt w/ chia seeds and fresh fruit, egg muffins, and breakfast burritos on whole wheat instead. They also do not eat out. I do understand they are children, so they do get apple sauce, chocolate, and pb&j but they are thriving fine on the same diet I have and enjoy many foods most kids turn their noses up at because I have raised them to expect it. About the only thing they get picky about are the optional toppings, such as for taco salads or zucchini spaghetti. BTW, I am a millennial. I’m 25 as of tomorrow, and my husband is 24. We’ll have been married for 6 years this year, and to be honest with you, no…We don’t have a bunch of time. We are always trying to improve our household, but we include our children in our goals and they are very happy kids. Articles like the one you were outraged about are simply put out there to cause more warfare between groups. Ageism does exist, and it isn’t just hate towards the older of us. Hating young people and children is just as bad. Eating healthy is the real reason I don’t allow cereal in my home. We completely pass the aisle, and we clean like maniacs. Guess they should have done some more thoughtful research…