So, as usual, I’m going to need to talk around my point in order to get you to see exactly where my point is.

In the journal Neurology, Neurosurgery & Psychiatry, one might find a quite peculiar story about a woman who, well, see for yourself:

A 35-year-old Australian woman wound up in the hospital after wearing skinny jeans while helping a family member move.

The move involved “many hours of squatting while emptying cupboards,” according to a report published Monday in the journal Neurology, Neurosurgery & Psychiatry.

As the day went on, those jeans were making her increasingly uncomfortable. But it wasn’t until that evening that the situation went south. As she walked home, the woman found herself struggling to lift her increasingly numb feet.

She fell to the ground, and lay there for several hours before she was found and taken to the Royal Adelaide Hospital.

At the hospital, the woman’s legs were so swollen that staff had to cut off her jeans. [source]

As we all know, a stiff pair of jeans is going to “hold you together” in “all the right ways,” right? This is how we gauge whether or not a pair of jeans is worth the cost to us. That means it’s likely to not gape at the waist, no buckling or pinching in the hips or near the touche, and will be form fitting in the thighs so that it doesn’t wind up making you look wider than you are. There would be very little give in the places that matter, because “give” means “losing their shape” and, ultimately, you losing yours.

But this is what would make jean material inhospitable to working out, right?

Neurologists tried to figure out what had gone wrong. Tests revealed that she had almost no muscle strength in her ankles and toes, while the muscles of her hips and knees were normal. A CT scan of her legs showed signs of muscle damage in the calves.

Tests of the tibial nerves, which provide movement and sensation to the calf and foot, and the peroneal nerves, which run from the outside of the knee down to the foot and ankle, showed they weren’t sending signals properly.

That was the clue. Nerve damage can be caused by pressure. In the case of the peroneal nerves, that can include pressure from crossing the legs, wearing high boots or squatting. (Previous research refers to “strawberry pickers’ palsy.”) [source]

The squeezing of the fabric into the flesh and the flesh into the bone, actually puts a squeeze on the nerves that run throughout the body – imagine that? – and ultimately resulted in the loss of mobility at the end of those nerves which, ultimately, control the entirety of the lower body.

The actual article from the journal makes it clear: the too-tight jeans actually contributed to the neuropathy – the medical term for “general purpose problem with the nerves” – she experienced, but also the rhabdomyolysis, as well.

We’ve talked about rhabdomyolysis before, right? Of course we have:

Rhabdomyolysis is a serious syndrome due to a direct or indirect muscle injury. It results from the death of muscle fibers and release of their contents into the bloodstream. This can lead to complications such as renal (kidney) failure. This occurs when the kidneys cannot remove waste and concentrated urine. In rare cases, rhabdomyolysis can even cause death. However, prompt treatment often brings a good outcome. Here’s what you need to know about rhabdomyolysis.

There are many causes of rhabdomyolysis. The most common causes include:

So, in other words, the wearing of a garment that presses directly on your nerves in the midst of strenuous activity leads to not only nerve damage, but muscle damage so severe, it over-floods your kidneys to the point where they can no longer do their job? Possibly impeding your body’s ability to send waste to the kidneys for them to process it because of the tightness of the fabric? We understand what this all boils down to for this woman and her skinny jeans, yes?

Please understand that working out in waist trainers, corsets, and what have you are no different.

In the midst of a workout, you are actively breaking down muscle fibers – even if all you’re doing is running or some form of cardio – and it’s a constant cycle. You break down muscle fibers, the blood stream is overloaded with the amino acids from the break down, the kidneys filter it out, the body repairs the torn muscle fibers with the consumption of dietary protein. When you wear fabric that is too tight in the midst of training, you run the risk of causing damage to your nervous system, causing undue damage to your muscle fibers, and over-flooding your kidneys.

While it’s noted that this woman wasn’t working out – she was helping a friend move out of their home – but was doing so for several hours in comparison to how long the average person wears their waist trainer during exercise, it’s also worth noting that many women wear their waist trainers all day and rarely – if ever – is the consideration given to the potential for nerve damage due to extensive wear. And, if you have a particularly active day – chasing around children or merely on your feet all day, for example – you’re especially at risk.

The nerve damage component is, ultimately, inevitable. Reports of dizziness or “lightheadedness” for women who insist on wearing these devices in and out of training are not just signs that you aren’t able to inhale enough to supply your brain with oxygen, but also signs of nerve damage. The same can be said for muscle atrophy – essentially the same thing you’re attempting to force when you try to wear a device intended to shrink your middle. There are an abundance of muscles in your core – trying to force them into a space and shape where they don’t belong causes atrophy, a word intended to describe the wasting away of muscle. The muscle fibers that can’t “relocate” ultimately are worn away from the wear and tear of trying to go where they can’t.

And, the wasting away of muscle fibers causes the backup of acids from muscle damage in a way that leads directly to the kidneys being over-flooded, thereby causing the rhabdomyolysis and kidney damage and, and, and…

You get the picture.

One of the most complicated parts of trying to convince people to stop doing things like this is the fact that the consequences aren’t immediate. As much as we gripe about being a “microwave society” that wants everything immediately, we also have to admit that as long as we don’t see the consequences of our choices immediately, we’re oftentimes okay with making a choice that isn’t in our best interests. So goes it with waist trainers.

You may very well manage to “shift the fat from one place to another” – a claim that, for numerous reasons, needs to be challenged on its own – and that benefit might come before you begin to lose the feeling in your feet, calves, and ankles. You may very well successfully “lose weight” while wearing them because you can’t eat as much. But, rest assured, if you’re putting enough pressure on your intestines and stomach that you can impede your ability to nourish yourself, you are absolutely putting enough pressure on your nervous system to cause damage, and in an important part of your body, too. 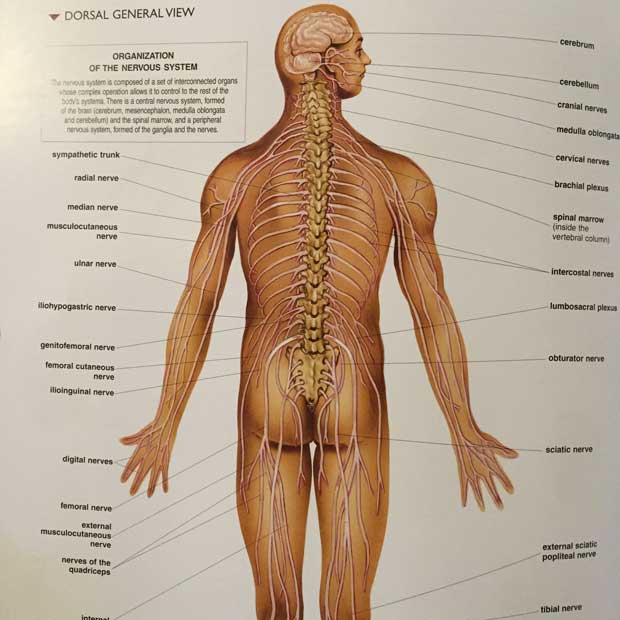 graphic of a map of your nervous system; click for a larger view

Nerves run all throughout your body – they’re what facilitate feeling, movement, and – essentially – an important part of what keeps you fit and active. The nerves at the base of the spine – right where all these waist trainers nest – are even more important because that’s the connecting center for the nerves that extend into the entirety of your lower body.

It’s just not worth it.

Listen. No one understands more than I do the quest for the perfect figure. And no one understands more than I do that “the perfect figure” is going to have one katrillion different variables, all reflecting the one katrillion women on Earth who will see it differently. But please understand – there are healthy ways to achieve that which won’t include extensive kidney and nerve damage. You can safely and healthily change your body if you wish – it’s not overnight, but no healthy method (that doesn’t involve a licensed surgeon) will be – and it will be a way that prolongs your health instead of negatively impacting it. Let’s vow to do it in healthier ways instead of quick ways.

Let’s also vow to make sure our skinny jeans (and our undergarments) aren’t killing us, too.

In Defense of Serena Williams

Wow, thank you for this post. I’ve been curious about waist trainers and I never really thought they could be so dangerous. It shocked me when I had seen the IG account of the brand that Kim K wears- they had a picture of literally hundreds of waist trainers waiting to be shipped out- so I know there are tons of people trying them out.

I don’t know anyone who uses waist trainers but I know lots of women that wear extremely tight skinny jeans. Here in the UK the latest fashion is “super skinny” and I despair at what these people are doing to themselves in the name of fashion!

Thank you for shining a light on waist trainers. I know women who wear them when they workout and others who do not workout but wear waist trainers. I have always felt they were not safe because of how tight they clinch the waist. I wish that I could post this information on every Instagram, Twitter and Facebook account. It amazes me the length people will go to in the name of beauty.

So at know time it is ok to wear a waist trainer? I mean I get why not to wear one while working out. But not even around the house or underneath and outfit while being moderately active, keeping in mind not to wear it ridiculously to tight?
IN ANYCASE THIS IS VERY GOOD AND HELPFUL INFORMATION

At no time whatsoever is it ok or safe or sane to engage in this. Work out, be active, change your body in a healthy and sensible manner, and leave the constricting garments to the wayside.