Paula Deen Planning To “Lighten Up” Her Cooking

A month after being widely criticized for revealing she has diabetes — as well as a lucrative endorsement deal for a drug to treat it — Paula Deen says she’s ready to show a lighter side to her famously fatty Southern-style cooking.

Just don’t expect her to swear off butter. 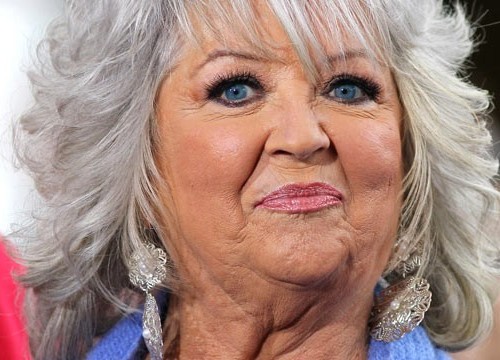 “I am who I am. But what I will be doing is offering up lighter versions of my recipes,” the longtime Food Network star told The Associated Press during an interview at the South Beach Wine and Food Festival on Friday.

“I will have a broader platform now, trying to do something for everybody,” she said. “But you know, I’m Southern by roots. I was taught (to cook) by my grandmother and nothing I can do would change that.”

The Food Network did not immediately respond to questions regarding Deen’s new approach or whether they were involved in the decision.

Last month, Deen drew the ire of many in the health and culinary worlds when she announced that nearly three years before she had been diagnosed with Type 2 diabetes. Roughly 23 million Americans are believed to have Type 2 diabetes, a condition blamed in part on obesity and unhealthy lifestyles.

During those years, she continued to promote her butter- and bacon-laden cooking on television and in books and magazines, and to profit from lucrative endorsement deals with companies such as Smithfield ham and Philadelphia Cream Cheese.

But the harshest criticism was triggered by her simultaneous announcement that she also would be a paid pitch person for drug maker Novo Nordisk’s new online program, Diabetes in a New Light, and for its pricy drug, Victoza, which she takes.

Many wondered why she appeared to wait until she had a paying endorsement before revealing her diagnosis.

“Yes, I am being compensated,” she said Friday. “It’s the way of the world. It’s the American way. But I am taking a portion of that compensation and giving it back to the (American) Diabetes Association.”

Deen would not say how much she is being paid or what portion would be donated.

And she dismissed the idea that she should have announced her diagnosis sooner, citing her longstanding battle with agoraphobia.

“It took me 20 years to come out and stand up and say, ‘Hey, my name’s Paula and I’m agoraphobic,'” she said. “I was so ashamed, so embarrassed. So to do it in two-and-a-half years, I thought it was pretty good.”

Deen, who is 65, shrugged off the criticism — including by some fellow celebrity chefs — saying her fans have stood by her.

“I think a few people who have access to a TV camera and ink kind of wanted to hate on me for coming down with something,” she said. “But I so don’t worry about it.”

Deen lives in Savannah, Ga., where she ran a successful catering business, wrote a best-selling cookbook and opened an acclaimed restaurant, The Lady & Sons, before launching “Paula’s Home Cooking” on the Food Network in 1999. She won a Daytime Emmy as Outstanding Lifestyle Host in 2007, and has branched out to cookware, foods and furniture bearing her name.

Her recipes include deep-fried cheesecake covered in chocolate and powdered sugar, a quiche that calls for a pound of bacon, and a French toast casserole made with two cups of half-and-half and a half-pound of butter.

But Deen notes that food is only one piece of the diabetes puzzle — along with genetics, lifestyle, age and race — and emphasizes that she doesn’t eat like that every day.

Following her announcement last month, Deen said she had stopped drinking the sweet tea she used to sip all day and had taken up treadmill walking. On Friday, she told NBC’s “Today” show that she has been eating less and exercising more.

Deen also has been promoting her son’s take on healthy eating, Food Network’s “Not My Mama’s Meals,” which stars Bobby Dean making lighter versions of his mother’s recipes.

Though Deen said she last month wasn’t planning to change her approach to on-air cooking, on Friday she said that when she begins shooting new episodes of her show this spring, the recipes will offer something for everyone, including people who want healthier recipes.

But it may be a while before viewers see the difference. Because filming and production schedules are set well in advance, it could take up to two years before those episodes are aired. [source]

I’ve already said everything I’m going to say about this. I just… I wish her the best.

Why Healthy Food Is So Expensive: The Price vs The Cost

This sucks. She is falling victim to the pressure. Anyone who is allowed to light the stove on their own could see that her recipes were rich. Too rich for folks on a diet or with diet restrictions because of their health. That was the fun behind her recipes. Why should she have to curb her TV cooking to placate folks who can’t eat it? If you don’t like her show, you can change the channel.

I remember when Ms. Patti LaBelle lightened up her dishes when she was diagnosed with diabetes, she didn’t hide it and it was welcomed. This is some other mess! She should have took a note from Ms. Patti and kept it real. Side note, I love Paula’s blueberry dumpling recipe, it only has a little bit of butter and the blueberries are delish!

I agree with Ms. Serenity. I can see other people living their lives and the consequences they have and choose whether to do it myself or no. If someone is too risky having sex and opens themselves up to std’s, doesn’t mean I have to be the same way. If someone else watches tv all day long and doesn’t exercise, doesn’t mean I have to do that. I’m lucky to be educated, and I’m also lucky to have some common sense, it’s each person’s responsibility to take care of herself, just like it’s mine to take care of me. I found out how bad sugar was, I started reading labels (big surprises!), and since I know how to cook, I know that a stick of butter for a casserole is over doing it, so if I choose to cook that particular casserole, I will put in just enough to get flavor. If you know something’s bad, don’t do it. People looking to make a buck will always offer bad things, because it sells, gotta watch out for yourself.

I wish her the best too.

On the subject of holding on to traditions, I wish people would find reasons other than “my mother did it” or “my grandmother did it” to justify their cultural practices. I’ve seen so much harm done over the years because folks are super committed to respecting their parents’ traditions, whatever the cost. Half the time, the traditions aren’t set in stone: they’re only one or 2 generations old. So they came into being because somebody one or two generations ago was willing to break with tradition. Rather ironic, I think.

I love Paula. She is my go to when I want to cook something decadent. It’s her profession, I don’t understand all the backlash. I, unlike many of the people who comment about her, saw her in person May 2011. She is simply an apple shaped women who is dreadfully short. She is not a huge women as most would think. I really wish people would lay off. If you want something healthy, she’s not the one for you. Check out her son’s show, Not My Mother’s Meals.

First, I think you must have chosen the ugliest photo of Paula available – it made me laugh!

Second, I have been so disappointed about this entire story. I used to watch Paula for entertainment purposes, and her mac and cheese is a great crowd pleaser once a year for Thanksgiving. But since this news came out I haven’t been able to stomach her.

Here in Georgia at Kroger the organic chicken breasts have her face on the package and I had to grin and bear it when I put it in my cart.

She has so many excuses. First she said she wanted to come to the public with a solution when she first came out with her diabetes announcement. Then she said she doesn’t eat like that every day. Now she’s saying she learned how to cook from her grandmother. I just wish she had been real and said, “I didn’t know the damage I could do to my body. I didn’t think diabetes would happen to me. I’m proof positive that you should watch your health.”

I understand her food choices are part of her brand, but her son’s show is actually pretty good – that should have been HER idea.

I wonder what all the people who were, “I am curvy and I like Paula Deen and if she can eat and cook this, so can I!” think about this now.

Don’t get me wrong, everybody has got the right to live as healthy or unhealthy as they want, but they should realize that there may be consequences.

I would think that people with diabetes or any other health issue would not use Paula Deen as a resource for healthy meal-planning. As much information is out there via the web, in magazines, and on television about what makes a healthy diet, surely we cannot blame old Paula for Americans’ food choices. I agree that her cooking is excessive in its decadence, but eating that way on a regular basis would be absurd. I guess if she inspired people to eat poorly, maybe now she can inspire them to eat healthy.