Paula Deen Appears On The Cover Of People 30lbs Lighter

I don’t have any plans on fronting like I actually like Paula Deen. I don’t. However… this definitely caught my eye.

After years of living in denial about her diabetes diagnosis, Food Network star Paula Deen revamped her lifestyle and her pants size. In this week’s issue of PEOPLE, the queen of southern cooking reveals how she lost more than 30 lbs., shares her healthy get-slim recipes, and her son Jamie’s own 40 lb. weight-loss story. “It’s not easy to lose weight,” Deen admits to PEOPLE. 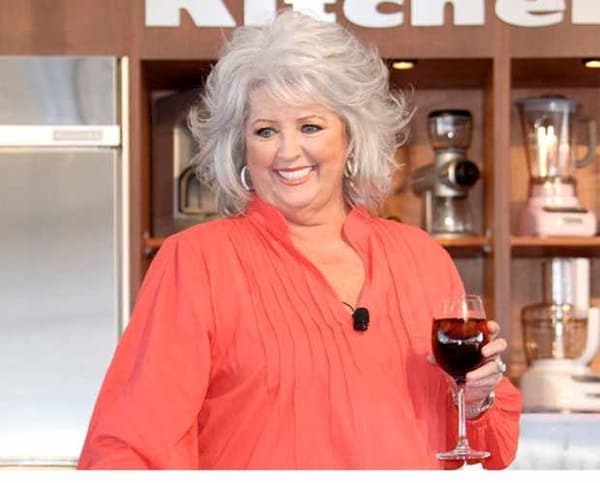 For the love of butter, is this the same Food Network chef who famously sandwiched a burger topped with a fried egg and bacon in between two doughnuts? Since she publicly announced in January that she has type 2 diabetes, “I do think differently now” about food, says Deen, 65. “The architecture of my plate has changed. I double up on greens – whether it’s salad or vegetables – and my carbs are just a spoonful.” For dessert, “I’ll have a bowl of sugar-free ice cream with strawberries and blueberries on top.” As for that doughnut burger? “I certainly don’t recommend eating a doughnut cheeseburger more than once in your lifetime!” she tells PEOPLE.

Deen’s healthier approach to her diet has helped the 5’6″ cook shed more than 30 lbs. in six months and dropped from a size 18 to a size 10. More importantly, it’s built up her confidence. “I feel a thousand times better,” says Deen, who also gives herself daily injections to control her blood-sugar levels. “I have more energy, I sleep better. The weight loss has made my health issues better.” 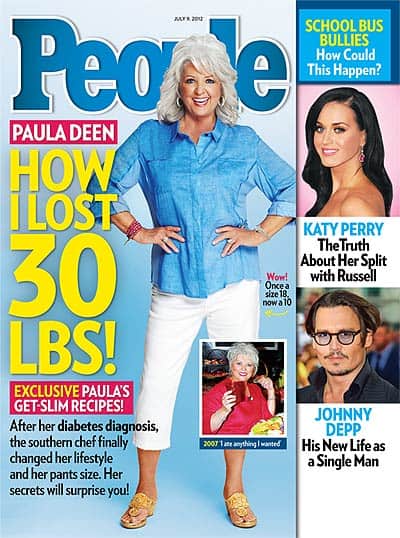 Just acknowledging those health issues is a huge leap. “I denied my diabetes for so long because I didn’t want it to be true,” admits Deen, who was first diagnosed three years ago. “My doctor said to lose weight. So I gave up sweet tea but I continued to eat as much as I always ate. I thought, ‘I’m not really obese.’ So if I wanted two biscuits, I ate them. Every day I thought, ‘I hope my medicine works.'”

When she hosts a family dinner for her husband of eight years, Michael, 56, her sons – Jamie, 45 (who recently dropped 40 lbs.) and Bobby, 42 – and her three grandkids, health comes first. “We love fried pork chops, but I never cook them now,” she says. “We cook our pork on the grill.” Her love affair with butter, however, lives on. “I still use real butter,” she admits, but now adds only a teaspoon instead of a tablespoon to her grits.

Well, alright. Congratulations to both her and her family for changing the way they eat and living a little healthier. Here’s hoping they keep it going.

Ending Emotional Eating, and The Transformative Art of Self-Care: Part I

Ending Emotional Eating, and the Transformative Art of Self-Care: What is a Coping Mechanism?

I really hope that is a healthy weight loss and not photoshop. I know women look up to her through her cooking, so hopefully her show is reflecting her new lifestyle as well. I wish her the best.

Im glad that she is admitting her recipes were not healthy. I hope that cooks healthier on her television channel. I have an aunt who is pre-diabetic. She just started eating healthier but she will not exercise. The doctor told her not to lose weight. She is 5.8 and 175 but she is 60. I do tell her not to buy processed foods and stop drinking the rum punch. She refuses to eat complex carbs or fruit but buys MC’Donalds and rum. Then goes over to my grandma’s house and eats butterfingers and oreos. I just convinced not to buy food with high fructose corn syrup. Then that stupid commercial came on. I pulled up an article on your site. I am trying to motivate her to live a healthy lifestyle so she will not get diabetes.

No apology to the people she steals from, her viewers.

She can start apologizing:

Mmmmmm hmmmmm Paula. I’m giving her the side-eye with Anthony Boudain (my husband in my head) o_O.

TheSweetestVegan on YouTube is actually making some of Paula Deens recipes from her books vegan.

For so many people, like Paula, her “light bulb ” moment comes after they have been diagnosed, not before. I have no ill will towards her, just hope for the best. If we can get out of the “treatment “paradigm and into the “prevention ” one, a lot more strides can and will be made.

I am not in agreement with all the comments about Paula Deen owing her viewers an apology and being a liar. I have heard her say numerous times on her show and in person that “…I am not your doctor I am your cook…” She never told an untruth about the health quality of her cusine. That statement alone indicates that she knows her recipes were not health food. And really as a viewer…I am smart enough to realize the health quality of her cooking too. It is always easier in life if we have somone to blame. Instead of spewing negativity towards Paula Deen when she is aparently tring to make a positive change in her eating; why not just take responsibility for our own FAT…so to speak. I can watch folks make unhealthy recipes all the time, but I do not have to choose to make them myself. I made Paula Deen’s recipe for “Not yo mommas banana pudding” for a recent bbq–I did not even eat one piece and most of the guests just took a little taste. Now those folks who ate big portions may need to work on portion control and would most likely overeat even if the only choices were healthy. Ultimately, those who took none, a little or a lot all had to take responsibility for what they put in their mouth. I just can’t see blaming the makers of the hot dogs, hamburgers, potato salad, banana pudding etc. Especially, when there were healthier choices available at the gathering. But that’s just me.

QueenTeen
I could not have said it better, we make our own choices in life.

I agree! She is not your doctor nor your nutritionist, and most importantly, she is not YOU. You can easily research recipes and figure out if they’re healthy or not. I can read the ingredients label and I know if its healthy or not or if I can sub any ingredients to make it healthy. People always want to play the blame game…..

there is absolutely no way she has lost 30 pounds. i’ve lost 28 pounds in the past 3 months and am down from a 16 to a 14. that picture is definitely photoshopped.

and she is an absolute fraud–i have no respect for her. notice how she just slid a mention of her medicine right in there?

Annie,
I was thinking the same thing! Thank you!

You cannot compare your weight loss to hers. Some people lose 10 pounds and drop a size. It depends on your height, build and weight distribution.

I never heard of Paula Deen until 2 years ago on a Gullah Island tour that included Savannah, Ga. The plan was to eat at her restuarant, “Lady and Sons” in a private room. Reservation for lunch start at 9am and the people made a line down the block and the same thing around lunchtime for dinner reservation.
When I heard the cuisine was southern cooking I knew there were going to be things I don’t eat on a regular like a roll (don’t remember if it was a pancake or corn bread) smothered in syrup like bread on a place setting dish or the fried chicken. But, I must admit I had the smothered pork chop that was to die for. I liked it so much I found the recipe online.
I’m a person who knows what I need to be doing for a healthier lifestyle and its good to know that even Paula Deen has to change her lifestyle.

I don’t think Paula Deen owes anyone an apology for her recipes. People ate unhealthy food before she came along, and will continue after she’s gone. I can’t really dog the woman, I have several friends and relatives with diabetes and they were in denial, too. I can understand, it’s a scary thing. Sick or not, changing your eating habits IS difficult. Eating food, or “food” that is bad for you is a national past time.

True story: My Dad was a hard core junk food junkie. He found out when the doughnuts were delivered to the nearest 7-11 and would be there at 2:30 am so he could get them fresh. He was diagnosed with diabetes. Now the man wasn’t dumb, he was a Navy Vet and electrical engineer, but he gave me a big speech about how he was going to eat what he wanted, because what good was life if you had to restrict yourself like that. So he continued to eat…until my Uncle Elmer (Dad’s brother in law) had his first amputation due to complications from diabetes.

He got rid of his junk food and changed his eating habits the minute he came home from visiting Uncle in the hospital. Unfortunately, I think a lot of people wait until they get a shock like that before they take their health and diet seriously.

Besides, if someone needs to be told that a burger topped with bacon and a fried egg, served between 2 doughnuts is unhealthy then they have more issues than Paula can solve. *lol*

Oh my, Paula Dean looks better and different. I love her baked french toast casserole recipe. It was so much sugar added to the recipe I had to heavily modify it but it was really good.