My curiosity is piqued, buuuut…..

Activewear? Athleticwear? Sportswear? Does anyone else think we need a better word for the gym-to-street sector that has suddenly become the hottest thing to cover two legs — at least if the latest entrant to the field is any indication?

I am speaking of Beyoncé, of course, who is entering a joint venture with Philip Green of Topshop, according to British Vogue.

The venture does not seem to have a brand name or a design team yet, but it does have a corporate identity: Parkwood Topshop Athletic Ltd. Catchy! (O.K., but it is descriptive: It’s got both partners, listing Beyoncé’s company first, and the product.) It’s scheduled to be unveiled in about a year.

Beyoncé’s news comes on top of the introduction of Alexander Wang for H&M’s activewear. (Let’s call the category A-wear for brevity’s sake.) It also comes shortly after Nike held its first New York runway show and Tory Burch made its entry to the category. All that pretty much confirms, if anyone was in doubt, that A-wear is now an officially, no longer potentially, Really Huge Thing.

Despite J. Crew’s decision to sit it out.

And though I have been a little skeptical of Beyoncé’s past fashion influence, and her last fashion foray, House of Deréon, which went pretty much nowhere, this particular brand extension makes some sense to me.

After all, Beyoncé may not be noted for her association with any one look, other than spangled leotard, but she is known for her workout ethic and dance moves. I’d wear what she was wearing if it could make me move like that. Or at least fantasize that I could move like that. And the promise of fulfilled fantasies, no matter how unrealistic, is what drives clothing sales, n’est-ce pas?

She’ll also have the Topshop manufacturing and distribution savvy behind her, which is no small thing. [source]

So, the gym-to-street sector originally started with men, and it’s been called sportswear for a very long time, with Nike being one of the pioneers of that niche, but mainly for an – ahem – urban market. Jordans, basketball shorts, joggers…traditionally guy stuff. All gym-to-street. It’s sportswear.

I don’t see a need to reinvent the wheel just because it now has a willing-to-pay-$150-for-a-dope-pair-of-partially-spandex-tights crowd.

Secondly, I’m skeptical not because of Dereon (which kind of turned into “that thing we don’t talk about, and we flinch a little when someone mentions it”), but because of the practicality of high-fashion athletic wear. It just isn’t. And, while I like cute sporty gear just as much as the next gym bunny, I still long for stuff that is more than cute. I want it to get the job done.

I saw a phenomenal pair of $400 tights, but they felt and moved like leather.

I saw a gorgeous strappy sports bra for $80, but they had the nerve to go up to a D-cup, and the straps were as thin as shoelaces.

I’m not even a D-cup, and I can tell you that nobody’s D-cups are being held up by shoelaces in any moderate-impact activity (think aerobics.) You might as well stop fooling people and just sell that up to a B-cup.

I’ve seen “yoga shirts” that are so loose and free-flowing that they fly over your head or trap your arms when you’re in your adho mukha svanasana (down dog for the unitiated), immediately turning you into a safety hazard to everyone around you. If I see you wearing that in my yoga class, I’m moving to the other side of the room, in a different row. You’re about to cause a domino effect.

The part of sportswear that we love is the fact that it is dual-purpose: I can wear it in the gym if I want, or I can grab it fresh out the dry and style it with a dope outfit. To me, that justifies the price – I’ll pay a good chunk of change (while simultaneously avoiding it if I can) for something I can get multiple purposes out of, happily.

A lot of this fancy pants workout gear is not actually functional. It’s just regular clothing that uses traditionally fitness-centered (and, oftentimes, more forgiving in the sizing) fabric blends to get the job done. Alexander Wang’s activewear line with H&M? 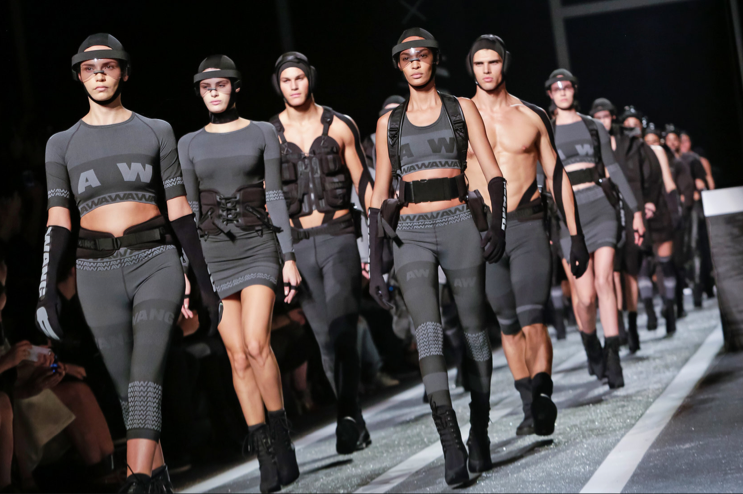 Fly though it may be…c’mon. (I’m also salty boots that it all sold out across the city by the time I had the free time to get out there. Extra salty. Like, whole bottle of Lawry’s salty.)

Beyonce’s line hasn’t even been designed yet, so I’m hoping that just as much attention will be paid to the function of the stuff as will be the form, the way it looks.

A girl can dream, right?

What do you think? Are you ready for it? Do you love the new trend of fitness fashion? Did you snag some of that Alexander Wang stuff (and can I borrow it? We can pretend it’s both of ours… and we’ll just keep it at my house, yes?)

My Thoughts On The Vogue Italia “Plus-Sized” Cover, “Real Women,” and Body Snarking

A Whole Foods Grows in Brooklyn