So…the first time I saw Perez Hilton, he was in an episode of Dogs 101 on the Animal Planet.

Imagine my shock when this appeared in the NY Daily Post: 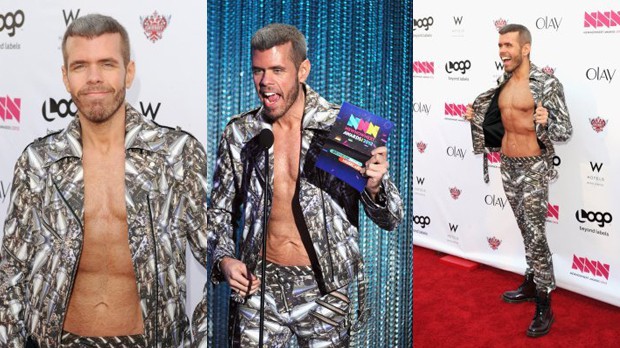 There aren’t enough emoticons and MS Paint arrows to express the buzz that Perez Hilton incited as he walked the red carpet at the NewNowNext Awards Thursday.

The 34-year-old celebrity blogger showed up to the awards show sans shirt, donning a bullet-print blazer, tight pants and a smirk while flaunting his newly fit body.

Perez, who is best known for his frumpy physique and childish commentary on celebrity photos, told the Huffington Post that his six-pack and trim figure is the result of lots of diet and exercise.

“It wasn’t quick,” he told the site. “And I worked for it! I’m STILL working for it! In fact, I’m working much harder on my fitness now than when I first started this journey.”

The blogger reports that he’s lost between 70 and 80 pounds since he first started focusing on his looks, and actually launched a fitness-focused website called FitPerez back in 2010, in addition to his regular celebrity blog.

Several news outlets have reported that Hilton may have gone under the knife to achieve his chiseled appearance, but Hilton is insistent that a tough regimen of exercise and portion control is responsible for his new looks.

“Looking good isn’t as good as FEELING good,” he told the Huffington Post. “And I feel better than ever! I hope I’m able to inspire others.” [source]

For fair reference, here’s an old photo of Perez: 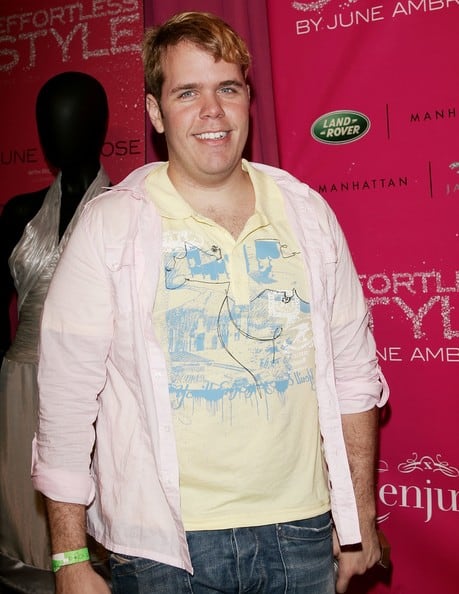 Ending Emotional Eating and the Transformative Art of Self-Care: Guilt, Blame, and Forgiveness

The Will Power Series: Why Is It So Hard To Develop Self-Control?

The middle photo with him at the mic, there’s some loose skin there when he’s leaning over a bit. That seems weird. I think he did do this through diet and exercise because he has been steady losing weight for years now. However, this particular new physique seems kind of unreal, I think he may have used spray on abs(it exists) or he’s sucking it in.

Yes, Alyssa summed up my thoughts on his new body. I don’t think he had surgery. He’s been losing for a long while and he still looks naturally imperfect.

He looks better, but I still don’t like him.

About whether or not he got surgery, I’m not sure. It’s entirely possible that he didn’t.
But he has been known to lie, plus the way his stomach skin looks in that middle picture makes me wonder. It looks like Tara Reid’s stomach after her lipo mishap.

Yes Tara Reeds plastic surgeries are epic. She’s had several botched procedures. Bad boob jobs and bad lipo that made her look like a burn victim and then several surgeries to correct the bad ones. One of the reasons she had that infamous nip slip years ago was because she had not feeling in her breast.

That said I don’t think Perez had any surgery, but I can see him getting spray on abs to create even more definition.

I’m not a big fan of Perez, but I remember him starting to workout seriously maybe 2 or 3 years ago (and I assume change his eating habits), so it looks to me like he put in the work. Good for him!

I had never seen a picture of him before, but had read about him. His transformation is remarkable however it happened. I thought the same as Chaosbutterfly though, his navel area looks a lot like Tara Reid after her round(s) of bad surgery. I’m thinking he may have done a mixture of things – portion control, exercise, with a dash of surgery, and a WHOLE lot of spray on tanner to add definition to his abs. I hope he is and remains healthy.

I think it’s great- good for him. I like that he talks about feeling great now, and I don’t even care if he had “help” (lipo or whatever)- it’s a lot of hard work no matter what, and he should be proud!

I forgot to say my main comment: I think he needs to put on a shirt no matter how good he thinks he looks. He’s doing too much for the red carpet.

His abdomen resembles many people’s, who have lost extreme amounts of weight. That area is very sensitive and dieting and weight lifting can’t always tighten it. If you watch the Biggest Loser, you’ve seen what I mean. The lower abdomen and upper arms aren’t very forgiving.

I believe he has lost the weight naturally by working out and eating correctly. He may have had some work done to tighten up loose skin from losing weight.

THAT’S the same guy KUDOS too him he looks Pretty Awesome.

Wow what a major difference!