What We Can All Learn From ESPN’s Annual Body Issue

Trigger warning: Unless you want to explain to your co-workers why there’s booty on the screen, consider this post not safe for work environments!

Each year, for as long as I’ve been blogging here, ESPN puts together a “Body” issue where athletes pose in their birthday suits, and talk about their relationships with their bodies. Every issue, I find myself inspired by these athletes and their commitment to their craft, despite all else. (And, by “all else,” I mean the public’s incessant need to criticize their bodies, instead of what their bodies are capable of doing.)

The list gets more and more unique every year, and the quotes are always dope. For example, the WNBA’s Phoenix Mercury center Brittney Griner had this to say about her body:

I’d describe myself as athletically lanky. I want to show people that. I’m comfortable in my body and I don’t mind putting it on display. Honestly, I like how unique it is. My big arms, my bigger hands, these long legs-I love being different. If everybody was the same, it’d be a boring-ass world. 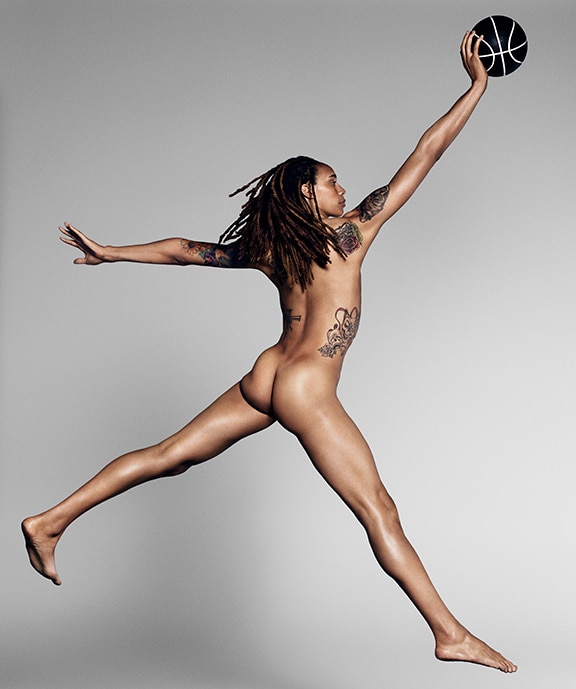 I’m sure people are going to have a lot of critical things to say [about these photos]. “Yo, she’s a man!” But hey, that’s my body and I look the way I look. People are either going to accept me for who I am or they’re not. I don’t know what people think I’m hiding. I’ve heard, “Oh, she’s not a female, she’s a male.” I’ve been told, “Oh, she’s tucking stuff.” They thought I was tucking. I mean, [in the Body Issue] it’s out there. Let me show that I embrace the flatness! I just want people to see somebody who embraces being naked, embraces everything about them being different. [source]

I can do rope climbs without using my legs, only my arms. Before the last Olympics, I would put a 10-pound weight between my legs and climb the rope all the way to the ceiling. 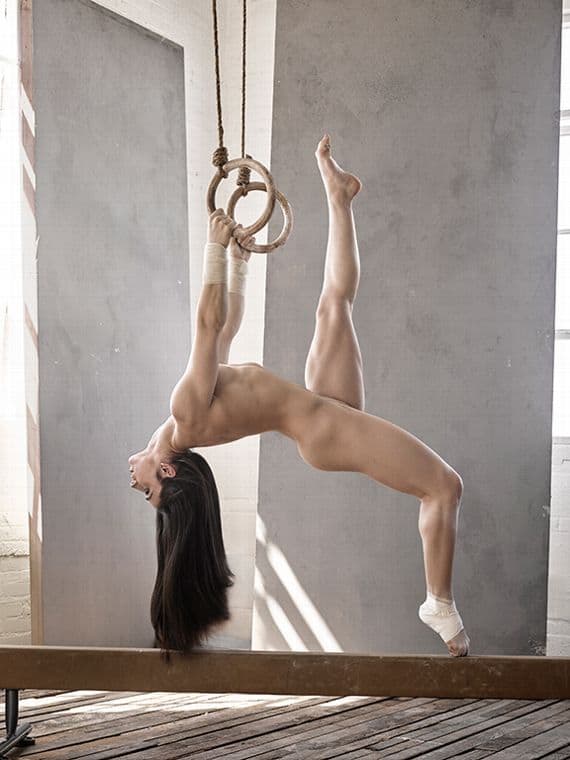 You can always spot the gymnast. They are so ripped and so strong. Even if I was just wearing a T-shirt, my arms would just be more muscular than other girls’. If we were playing sports, I would just crush them. Even now, when I race against a guy, I always think it’s fun to beat them because they get so upset.

I think imperfection is beauty. Instead of being insecure about my muscles, I’ve learned to love them. I don’t even think of it as a flaw anymore because it’s made me into the athlete that I am. [source]

LPGA golfer Sadena Parks shared this about her experiences:

“You guys can’t play golf.” I’m just going to say “you guys” because the word that this Caucasian gentleman used was so hurtful, so historic that it brought tears to my eyes at the age of 13. And my dad said, “This is the reason we work as hard as we do, because we want to change things. We want to show that, no matter who you are, you should not be treated the way that we were just treated.” 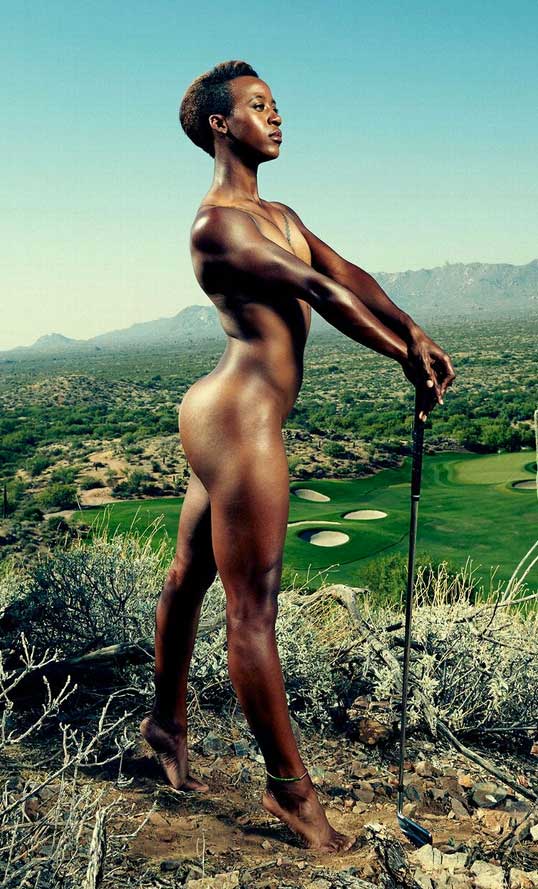 My skin color doesn’t give me a good excuse to say “I’m not capable.” Of course I had moments of doubt, but now I feel really comfortable [playing golf]. I know what my purpose is, and that’s what drives me. My purpose is to bring a lot more people into the game — to drive kids to understand how this game relates so much to your growth as a human being.

The other girls did not like me. When I started to beat them on the junior tour, some of the parents would give my dad crap or accuse us of cheating, of writing down the wrong scores. It got to the point where parents were following me and jotting down my scores to make sure that I wasn’t cheating. And those are distractions that no one — I don’t care if you’re an adult or a kid — no one should have to worry about.

Gee, where have I heard that before?

Parks also shared this about her physique:

I’m not a gym rat. I don’t want to be obsessed with it. I’ve been there — where I love working out, and I lift so many weights that my body gets so tense to where I can hardly swing because my flexibility is gone. You have to realize the muscles you’re using in your swing; you have to work them out in your workout as well.

I have a butt that is larger than I want it to be. I know it gives me power in my swing, but everybody is like “You’ve got a nice butt!” I’m like “Well thank you, but you can have it if you want it. I’ll give it to you, it’s all yours.” [source]

I’ll be honest, I like everything about my body. And I think it’s because I moved from Las Vegas to Texas. In Vegas, I was bombarded with all of these “double zeros” and Abercrombie models, these little people coming in for shows. I never wanted to be a part of that, ever. And when I moved to Texas, everyone here is just so open about their bodies. I see these big girls in these tiny little bathing suits and I’m looking at them like, “Man, these girls are so confident!” Now I just think, “I’m just going to throw far because I’m confident with myself and I don’t have to worry about what I look like anymore.” 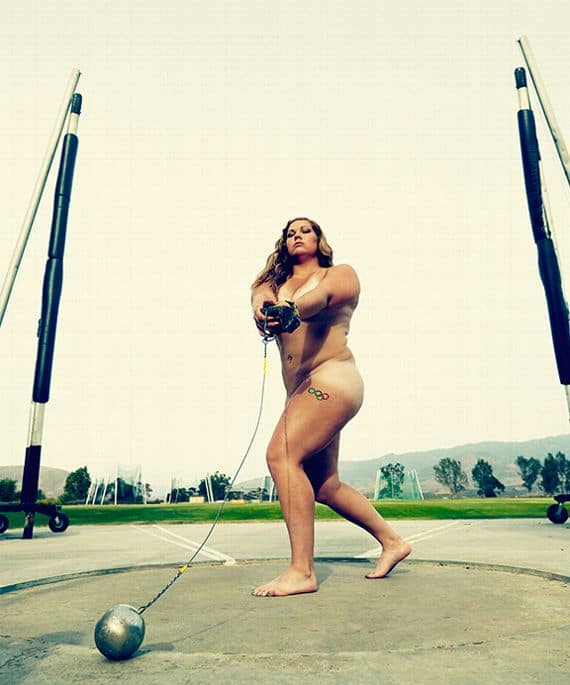 You might be prettier and skinnier than me, but I’ll kick your ass in a game of one-on-one.

I first learned the word “fat” when I was in middle school. I never knew that I was the fat kid in school until a boy told me that I was too fat. I thought, “What does that mean?” I had always been so athletic and into sports; I didn’t think I was that fat. But everybody wants to fit that skinny ideal picture that we see on billboards all the time, and people would always remind me that that wasn’t me. So you just grow a thick skin. Like I said, I’ll still whip your ass if we ever got into a fight. [source]

You can check out the rest of these interviews and more by checking out ESPN’s Body Issue online. Copies are on sale now at your favorite bookstore. I’m definitely copping mine.

The Salad Gallery: Round 4 – Pineapples and Pecans and Peanut Oils, Oh My!