#teambacon is working my nerves, man. 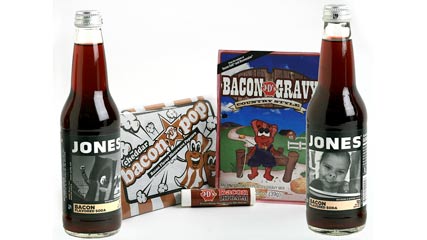 When you’re too lazy to make bacon, why not pop a bottle and just drink bacon instead?

J&D Foods, a company that specializes in all things bacon — including bacon-flavored envelopes and the bacon Kevin Bacon sculpture that made headlines recently — has taken the obsession one step further by coming up with a new drinkable pork product: bacon-flavored soda.

That’s right, Coca-Cola is out, and swine soda is in.

Since both companies are based in Seattle and are known to take risks developing wacky products, Esch said it was only a matter of time before they got together and combined forces.

“They know soda. We know bacon. We were destined to merge our technologies for something big,” Esch said. “We’ve already made bacon beauty products, bacon stationery and edible bacon products, so something drinkable was next.”

Esch said his crew and mixologists over at Jones worked tirelessly for months concocting the perfect bacon flavoring for the beverage.

After much trial and error, he said they were finally able to get the taste just right.

“Nailing the flavor was tough. We didn’t want pot roast, we didn’t want pork tenderloin, we wanted bacon. The drink started out tasting more like ham than pork. But eventually we were able to get the crispiness of bacon in there without it being overpowered by porkiness,” Esch said.

Team Bacon, out yourselves – which of you is going to be waiting to buy this?

Shouts to @SincerelyBrandi for torturing me with this… I truly appreciate it. 🙁

Got a Weekend WTF?! to share with the class? Send it to wtf@blackgirlsguidetoweightloss.com or find me on twitter: @inetespionage!

Okay I’m not going to lie…LOL I like bacon. But anything outside of the traditional strips that come in a package is just nasty to me. Cosmetics, stationary, SODA? That’s just way too much.

I love bacon and REFUSE anything but pork bacon. Its just tasty, and of course only has business poppin up in moderation (I blame about 5 full pounds on a very fulfilling but disturbing BLT habit that I developed last summer). But it’s not the flavor itself, it’s the fat, so I call fail on this mess.

Bacon has long ago jumped the shark.

I am team Bacon as well, but i swear that stuff is only okay for me in moderation. I wish i would drink something bacon flavored…thats just nasty. i cant get with half of these bacon products….well only think i can get with is real bacon. No Bacon drinks, Bacon hair cair, bacon soap, bacon anything else.

I like bacon.
Bacon Salt is a truly amazing and highly versatile product.
Baconnaise is great on sandwiches.
I even sampled the bacon lip balm.

But only one of those items is in my kitchen right now, and used so sparingly I realize that I bought it because I had an intense craving that I couldn’t shake – so picked the lesser evil.

But no way am I buying that Bacon Soda.

The real problem with bacon is that is only comes from pork bellies. Too much of the pig is wasted on rump roasts, hams, porkchops, and baby back ribs… Let alone hog maws, and hamhocks and stuff. That’s why bacon-struck folk have gone all out trying to satisfy their craving. Think about caffeine addicts that actually munch on flavored coffee beans… I can see it: Bacon soda chaser to follow eggs and cheese jelly beans and dark chocolate dipped coffee beans. Don’t wanna taste it, but I can see it.

Man… I give up. LOLOL

HAHAHA, I think that is absolutely hilarious. If someone told me about this I would not have believed them lol. What is the world coming to! A bacon drink WOW!

I love bacon SO VERY MUCH, but bacon soda…. that’s just nasty.

i love bacon. but not like THAT. that’s excessive. textbook USian excess & foolery. no thanks!

Ummmmmmm that is awkward…I once bought my friend bacon flavored floss because of her love for bacon but this is going too far. The floss was not meant to be ingested, this is. What is it made of? How do you get “crispiness?” THAT’S NUTS!!!!

E U! Just the thought

Conspiracy Theorist here….listen, all (they)(insert conspiracy here) want to do is keep you on medications so that the pharmaceutical companies can get over on you like a FAT RAT!!! look at KFC, BURGER KING, CHECKERS, SONIC, ETC…. (you feel me)Drinking Bacon! are you kidding me, lets be real here, this is simply to keep Americans dependent on the wrong foods and definitely on medications. Think of a world that is disease free and healthy, no problems right?

This my first time posting & Ms. kendall {Erika} I’m very grateful that this website basically found me when it’s suppose to be the other way around. I don’t like/eating bacon but this right here is just nauseating