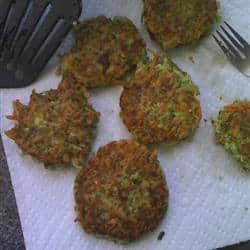 Mix all ingredients together. Fill oil in an 8-19 inch skillet to about 1/4 inch depth and place a shred of potato in it. Heat up on a medium-high heat. Mix the shredded potatoes, egg, flour, onion, optional backing powder salt and pepper. When the oil around the shred of potato sizzles vigorously, stir the potatoes mix again (the potatoes have released some water, mix it back in). Place a tablespoon of the mixture in the hot oil. Flatten it with the back of a spoon. The oil should reach about half the height of the center of the latke. The edges will be submerging. Cook the latkes until golden brown, about 4-5 minutes. Flip and cook on the other side. Transfer to a flat plate lined with paper towels. If you are planning to serve the latkes immediately – keep them in one layer until serving (you can place them in a warm (250 degree) overn. If you are planning to serve them later, cool completely and keep in a tightly covered container in the fridge, layers separated with paper towels. To warm the latkes up, place in one layer on a baking sheet in a 350 degree oven until warm and crisp.

Drizzle lemon juice over each latke. Serve with some thick Greek yogurt, or yogurt sauce.

Note: I do intend to revamp this recipe, because though it was made for me and was delicious.. I think I can do a little better than this with it. 🙂

Can not wait to try this reciep

Where you able to find a better recipe for latke’s. I admit I am going to have to google to see exactly what latkes are 🙂