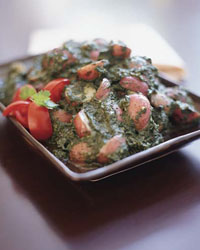 Meanwhile, in a large, deep skillet, bring the water to a boil. Working in batches, add the spinach by handfuls and cook over moderately high heat until wilted. Using tongs, transfer the spinach to a colander and repeat with the remaining spinach. Squeeze the spinach dry, then transfer it to a food processor and puree. Wipe out the skillet.

Slowly stir in the yogurt. Add the potatoes and a large pinch of salt, cover and cook over moderately low heat for 5 minutes, stirring occasionally. Add the pureed spinach and stir well. Cover and simmer for 10 minutes to blend the flavors. Season with salt. Transfer the potatoes and spinach to a platter or bowl, garnish with the cilantro leaves and cherry tomatoes and serve.

Jessica Simpson Finally Shows Off Her Full Body, A Day In Her Diet And More