Home It's All Mental The Three Stages Of “Full”ness: How To Stop Stuffing Yourself

The Three Stages Of “Full”ness: How To Stop Stuffing Yourself 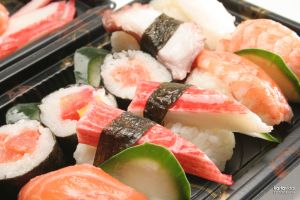 If there was one thing I used to love about eating processed foods (and dining at restaurants that served glorified processed foods), it was that “stuffed” feeling. You know what I’m talkin’ about – that “I might need to unbutton my pants a lil’ bit” feeling… often experienced on Thanksgiving… for some of us, it might be an everyday thing… it’s just something we’ve grown accustomed to. Couple that “I’m starviiiiiiiiiiiinnnnng!” feeling with that “Clean your plate!!!111” mentality and a plate full to the brim with processed food? You will stuff yourself.

Now, make no mistake about it – one of the things I learned quickly about cooking for myself was that I could, in fact, stuff myself guilt free because I knew I was eating what my body wanted. There’s nothing better than being able to gorge myself on a plate of good food without that “I’m making myself fat!” feeling.

However, there is a point where you have to abandon the “stuff yourself” mentality altogether. The goal has to be less of “stuff yourself” and more of “fuel yourself,” and that requires you to pay more attention to yourself in order to gauge your “three stages of fullness.”

The Okinawans call this rule “Hara Hachi Bu”, and if you haven’t tried it, you should. I did this on Thanksgiving — while I usually stuff myself with all the good food, I just ate until I was about 80% full. Of course, there’s no way to know exactly how full you are, but it’s a guideline. And as our brains are 10-20 minutes behind our stomachs, it usually turns out that when you think you’re 80% full, you’re actually full … while when we eat to 100% full, we are usually overstuffing ourselves.The result of this rule for Okinawans is that they end up eating fewer calories than most people. They tend not to gain too much weight as a result, and coupled with their active lifestyles (they farm and garden and generally stay active, even into their 100s), it keeps them very healthy.

The result for the rest of us is that eating fewer calories will keep the extra pounds off. If we pair this with the next rule and an active lifestyle, we can actually lose weight during the holidays.

A dinner with fruits, vegetables and sensible protein would result in a filling meal, no doubt, but how much of it do you really need? If the idea is that Americans, as a whole, have meals that are too large (regardless of quality)… then how do you gauge how much is enough?

Despite what our parents told us as kids, you don’t determine when enough is enough by the plate. You determine it by your stomach.

Think about it – there’s an old story about how Campbell’s Soup was frustrated by the fact that people kept their soups in the pantry and only used them when everything else was gone in the fridge… so Campbell’s went out of their way to brand themselves as “the perfect meal during a storm,” or “the perfect meal to eat when it snows.” Marketing it this way compelled people to do what? Eat soup during a storm. Eat soup when it snows. This also increased the likelihood that you’d buy more of it next time you hit the grocery store. Again, lots of what we’ve been told about eating and food didn’t always originate with the intended goal of benefiting us.

The point of eating multiple meals a day, despite rumors and new studies, isn’t only the supposed benefits to our metabolism. It’s to help stave off hunger to prevent us from overeating. The goal isn’t to have filling meals. The goal is also not to stuff ourselves on healthier food as opposed to crap food. The goal is simply to keep hunger pangs at bay. This is especially helpful for those who have those last 15lbs to get rid of. It’s no easy task, but it is simple.

The traditional Okinawa diet, with its emphasis on vegetables, whole grains, fruits, legumes (soy foods) and fish with limited amounts of lean meats serves as a model for healthy eating and healthy aging that not only reduces your risk of cardiovascular disease but also helps to minimize free radical production. Free radicals are cell-damaging molecules that are generated mainly by our bodies’ metabolism when we create energy from food.

The Okinawan cultural habit of calorie control called hara hachi bu, which means eat only until you are 80% full, plays a role as well as their habit of eating an antioxidant rich plant-based diet. Stopping at 80% capacity is actually a very good strategy to avoid obesity without going hungry because the stomach’s stretch receptors take about 20 minutes to tell the body that how full it really is and 20 minutes after stopping you will really feel full. [source]

What does this mean for your current eating habits? Well, for starters, it means you have to eat slower. It means you have to pay attention to your tummy. Once the hunger pangs are gone, determine whether you’re eating simply because you want to keep eating the food or if you’re eating because you’re genuinely hungry. If you want to keep eating simply because you’re enjoying yourself, then dive in… but if you don’t want the extra calories that’d only contribute to stuffing yourself? Then you’ve got the opportunity to push the plate away a little early, and save some extra calories!

Weekend WTF: Bringing It Back With… The Chicken Pop Tart?

I love this post! I’ve learned to eat from salad plates and take my time eating. I have also learned that if I take my time paying attention to the way the food TASTES, it eventually doesn’t taste as good and I take that as a signal to stop eating. I learned that during the time I participated in that “weight loss scam” you posted about a few months back; I can say that was one of the very few good things I learned so I try to do use it as a tool to stop eating so much; the other stuff I still struggle with. Yeah, I still have some scars from that. I find that if I do stuff myself I don’t feel so good afterwards then I start draggin’ around yawnin’, no energy, sleepwalkin’ (just kidding!) or I want to take a nap. Not good if I’m at work. 🙂

I’ve recommended this site to family and friends because I love it. Thanks for the good info!

Not eating to stuff myself is one of the things I know in my head; however, it is not a practice I’ve exercised much. I think a big part of it is that I do eat pretty quickly. This has been much harder for me especially since having a baby. I feel that barely have time to write this comment! I eat standing up more than I like to admit and it’s like some sort of race… i’m always losing (but not what i want to lose, i.e., the weight)

I learned at an early age that I hated feeling too full (or even full at all). The average person would look at me and assume that I am the type of lady that will fill my plate and then clean it. I’ve recently learned that I am a stress eater and a snacker. I could go a whole day enjoying my personal vice (ice cream) and not think twice about the fact that I have not eaten a real meal. On top of that, I could snack all day long and not feel full (which is why it was easy to polish off a whole bag or box of the bad stuff). At this point in my journey I am learning to let go of unhealthy snacking and stress eating and actually embrace the process of eating small healthy meals. That way I don’t feel discusted after eating.

In Islam we have a similar concept where you are advised to think of your stomach in 3 part. 1/3 should be filled with food, 1/3 water, and 1/3 air. It is Ramadan now and one of the lessons I learn during this time of year is that I am capable of eating less and enjoying food. I think from the knowledge I have gained from your site is that the way you approach food will directly affect your ability to be your best self every day. As I continue to grow and challenge myself not to over eat, I find accomplishing personal and professional goals have also become easier as well. Thank you for your wisdom and the love and passion of your words. Your audience is listening and I am personally most grateful for you.

When I was younger, my parents made me and my sisters join the “Clean Plate Club” at every meal. Now that I am older, it is so hard to train myself not to let my empty plate tell me when I’m full. I also eat suuuuuuper fast. This is magnified by the fact that my fiancé eats suuuuuuper slow! Lol. I try to put less food on my plate since i know i will probably eat everything on it :-(. I am going to try the 80% thing today. Then again tomorrow. Then again the next day…until it becomes a habit. Sigh. It’s an uphill battle.

I think my biggest problem is eating to fast. Guess it comes from the days when I only had 30 minutes for lunch..trying to change my ways