Dunkin Donuts Shows Why It’s Bad To Follow Your Nose

I couldn’t help but giggle when this popped up on my radar: 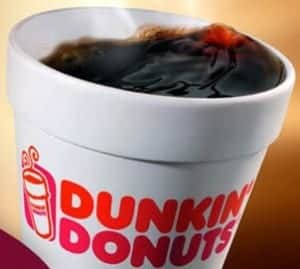 There is something brewing in the air in South Korea, and it’s waking up commuters taking public transit to work.

A new technology, installed on buses in Seoul, would release the aroma of Dunkin’ Donuts coffee into the atmosphere for riders to inhale.

The spray, known as “Flavor Radio,”  was set off by the sound of the company’s advertisement when it played on the buses speakers.

The compartments, which looked similar to conventional in-home sprayers that send a scent into the air, were only triggered by the Dunkin’ Donuts radio jingle.

According to the campaign, when the devices were installed, the aromatizers were spritzing the fumes of coffee into the faces of more than 350,000 commuters while on their daily ride to work.

The testing ran for several months and ended in April, according to a spokesperson from Dunkin’ Donuts.

Because of the launch, however, the coffee company said they saw a 16 percent spike in visitors at shops located by bus stops where vehicles were equipped with the smell-technology.

Dunkin’ Donuts also reported that their coffee sales went up by 29 percent during the campaign.

In a video explaining how the advertisement works, a narrator says “those who noticed the aroma while listening to the ad exhibited some surprised responses.”

Sandeep Datta, M.D., Ph.D. and Assistant Professor at the Department of Neurobiology at Harvard Medical School said there is an “incredibly direct connection” from the neurons that detect smells and the part of the brain that processes information and associates it with memory. 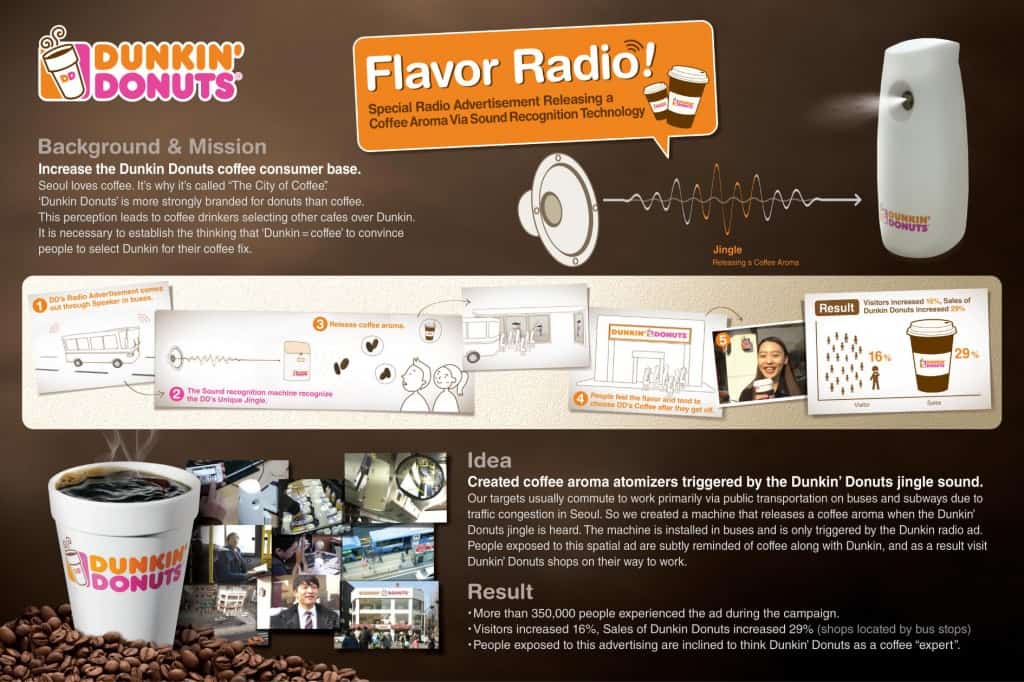 “It’s almost like your [nose] mainlines information about scents to the centers of your brain that involve emotion and memory,” he said.

According to Datta, smells can be emotionally evocative and can cause robust recollections of remembered events.

“It doesn’t surprise me that someone would try and use smell in the context of the advertising campaign because of the intimate association between smell and emotions and experience,” he said.

Datta likened that experience to walking by a Mrs. Fields cookie stand at the mall.

“It sends us mentally back to when we were children,” he said.

This isn’t new. Just like real estate agents who bake cookies in the oven of a house for sale during the “open house,” just like grocery stores that make sure the “bakery” is as close to the front door as possible, and just like any spa that keeps the eucalyptus, jasmine and lavender oils flowing in the air… we all know that smell and scent are connected to emotions. The right scent can make us feel at home… or hungry. And, if you’re not aware, you can wind up craving coffee (which, in all actuality, can be okay) and a donut (which, more often than not, can be the real problem… especially if you didn’t originally even want the donut.)

Lots of study has been done on scent and emotion, and for an emotional eater, this is like a hollow-tip bullet. Even I find myself wondering why the hell I’m craving a pastry when I walk past Starbucks, but at least I’m at the point where I can walk past and keep moving… and this is why I challenge the notion of “cravings,” because so many of our cravings are triggered by elements of our five senses that we’d never considered before, and no one wants to be held hostage to something they don’t understand. If you think seeing a picture can be triggering, imagine what scent can do – sniffing something makes you feel even more like being able to devour it is possible… even coming in the near future.

I’ve got to wonder – do we think this kind of technology is headed for the US? I mean, if it caused a 16% increase in sales, then…

Q&A Wednesday: How Can I Run Without Injuring Myself?

Just Say No to Waist Trainers

How One Woman Ditched the Processed Food on...

How To Dine With Nutrition In Mind

That makes me thing of good ideas . . . I could soothing smells around my home. When I binge eat at home, it’s because I’m stressed, upset, or anxious. I wonder if relaxing smells would help.

During the year that I lost 15lbs in 3 months, I used to light a lot of candles. I wonder if that helped a lot. Maybe I can use this scientific fact in my favor!

I hope not..just saw an article on the 20 most obese states with 30% overweight percentages. I guess they have used up America. Now they have to find a new market..if they started that here I think someone would personally try to put Dunkin’ Donuts out of business.

This is a new market they don’t have weight issues yet.They are just the new marks in their schemes to make extra ordinary profits.

This kind of guerilla advertising makes me uncomfortable. Anyway, I love the point about challenging the notion of cravings because I would never think of companies being strategic about using scents to lure customers. But now that you say it, it’s so obvious.

There’s been rumors that Subway does the same thing… that fresh bread scent is nothing more than an artificial spray to lure people.

Some even go as far as piping the scent in….

this is just a BOLDER apprach

I don’t think so. We live in a world where people have allergies galore. Can you imagine setting someone up to have an asthma attack? It won’t happen here. I’m quite sure of it……