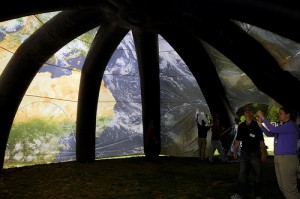 NASA Celebrates the 40th Anniversary of Earth Day
April 22, 2010 marks the 40th anniversary of Earth Day. NASA and the Earth Day Network are recognizing this milestone with an entire Earth Day Week.
Throughout Earth Day Week, April 17 through April 25 on the National Mall in Washington, D.C., NASA will have presentations and demonstrations at the impressive NASA Village. The Village, adjacent to the Smithsonian Metro station, consists of tents full of high-impact, visually engaging exhibits; presentations; and opportunities to meet NASA Earth scientists. Many other agencies and organizations will be represented through performances and programs on the Earth Day stage.
On April 22, Earth Day will also be Student Day as NASA will host more than 350 middle and high school students from area schools who will get to participate and interact with our scientists, engineers, and educators.
Begun in 1970, Earth Day is the annual celebration of the environment and a time to assess work still needed to protect the natural resources of our planet. NASA maintains the world’s largest contingent of dedicated Earth scientists and engineers that lead and assist other agencies in preserving the planet’s environment.
For a comprehensive listing of NASA’s Earth Day activities, visit: http://www.nasa.gov/earthday.